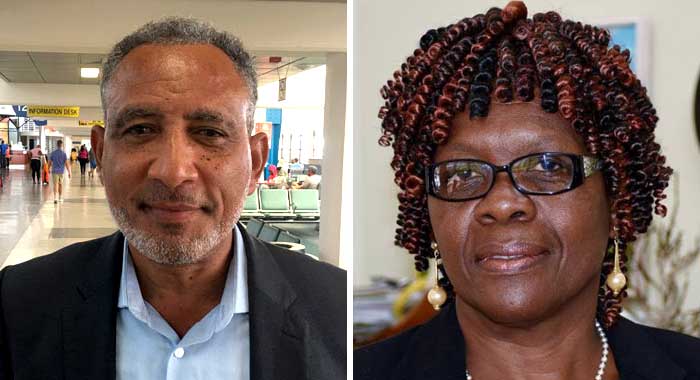 President of the opposition New Democratic Party (NDP), Godwin Friday says Supervisor of Elections, Dora James has made unsubstantiated claims about the character of one of the party’s candidate even as she failed to cite the law that protects privacy of registering voters.

“I am immediately struck by the absence of any reference to the Representation of the People Act … in your letter, particularly as your office is a creature of that statute,” Friday, a lawyer, said in a July 13 letter to the election chief.

“I suggest that this — and not your allusions to attitude and power — is a fitting departure point for our discussion of the events of 8th July 2020 at the ID registration centre in Barrouallie,” he further stated.

The NDP president was responding to a letter of three days earlier that James wrote him about a July 8 incident in Barrouallie, where Vibert Pierre, the registering officer for Central Leeward, ended registration prematurely over the presence of an opposition politician in the room.

iWitness News has obtained copies of a report that Pierre submitted to James about the incident, a letter James wrote to Friday and Friday’s response.

In his July 8 report, Pierre said that he ended the registration exercise after Benjamin Exeter — the NDP’s candidate for Central Leeward –twice refused to leave the registration centre, a classroom at the Barrouallie Government School.

Exeter, according to Pierre’s report, had said he was there to observe the process, as he had previously done in Layou.

However, Pierre told the elections chief that Exeter was sitting four to five feet from the assistant registering officer, Roslyn Francis, and, thereby, compromised the privacy of persons seeking to register.

‘similar courtesies could not have been extended’

In a July 10 letter to the Friday, who is also Leader of the Opposition, James said that in her conversation with Pierre, she learnt that Pierre had been “cordial and accommodating” when Exeter visited Layou, where the registration took place in a larger room.

“Therefore, if similar courtesies could not have been extended at Barrouallie, greater respect and understanding on the part of Mr. Exeter should have been exercised,” James, a retired educator, wrote.

She said that the incident in Barrouallie “showed lack of respect to the registration process”, adding that Exeter disrupted the process twice, resulting in it ending prematurely and persons being denied their right to register or re-register on that day.

“It also showed a lack of appreciation for the courtesies extended. His arrogance and disrespect to the registration team resulted in the premature closure of the registration/re-registration process,” James said.
She said that as supervisor of elections, she is mandated to ensure that the process takes place and that all the officers deployed can “exercise their duty fairly, safely and respectfully.

“Further, I expect that the same courtesies will be extended by the public. Hence, MR. Exeter is not excluded. As a consequence of this incident, measures will be implemented to ensure a smooth registration process,” James said.

But, in his letter, Friday said that James communiqué was “replete with references to privacy in registration, which is not enshrined in the Act”.

He said that even the oath of the registration officer at section 10 of the RPA “makes no such mention, and for good reason: the very information to be collected at registration is then published by your office in the register of voters.

“The assertion of a right to privacy here is absurd. You are euphemising your failure to ensure transparency,” Friday said.

He said that even if James’ account of what occurred in Barrouallie was accurate, “In it you have conceded that your registration officer refused to register members of the public queued up at the appointed time and place.”

He said that this is “in clear contravention” of section 23 of the RPA, which says:

“A registering officer or an enumerator who, wilfully or without reasonable excuse, omits to register the name of any person qualified to be registered is guilty of an offence and liable to a fine of $750 and to imprisonment for six months.”

“There being no legal basis to exclude Mr Exeter on grounds of privacy, Mr. Pierre is without ‘reasonable excuse’ for the refusal to continue registration on 8th July 2020.

“It is also not a reasonable excuse that Mr Exeter ‘disrupted the process twice’ by refusing to leave. Mr Exeter was plainly asserting a right which your office ought to protect. You have, by your own admission, misdirected your registration officer,” Friday said.

He said that having considered the reports of both Exeter and Pierre, “we are satisfied that Mr Exeter was in no way was interfering with or obstructing the registration process”.

Decades-old convention ‘not a courtesy’

In his report, Pierre had said that after receiving instructions from James to end the registration process on July 8, he had communicated this to Exeter.

Exeter, in response, “took out his phone and made attempt to videotape,” Pierre said.

“I then stopped the registration, I instructed him that he could not videotape in the centre.”

Pierre said that Exeter left the registration centre, returned later and showed him a message on his phone about his (Exeter’s) right to observe the process.

“I refused to look at it and reminded him that he has to observe from outside. Again, he refused to go outside and made attempted to videotape to show that I stopped the registration. I repeated to him that he could not videotape in the centre,” Pierre wrote.

Friday, however, said that Exeter “did not attempt to film the registration process itself; filming began after the process had been shut down by Mr. Pierre”.

“We wish to disabuse you of a troubling misapprehension that the decades old convention of candidates and their representatives from all political parties attending at and observing the registration process is a ‘courtesy’.

“This notion finds no legal merit as there is no proscription whatsoever in the Act to such attendance and observance. Therefore, any attempt to exclude observers by having them stand at a distance to look on or otherwise is unlawful.”

“Further, ‘courtesy’ implies a power dynamic that is most unhelpful. You are mistaken in your role.

He said that James, in her office as supervisor of elections, surely sees the benefit of observers identifying individuals seeking to pervert the democratic process by registering without eligibility.

“And undoubtedly, you are keen to restore your office’s reputation following the 2015 general elections, and to recover public confidence in the integrity of the Vincentian electoral process. We regret that your unbalanced investigation of the matter does little to change either….

“As regards your closing indication that you will be implementing consequential ‘measures to ensure a smooth registration’, be advised that If Mr Exeter and/or any other representatives are denied their right to observe effectively, vigorous legal proceedings shall ensue,” Friday said.

James became Supervisor of Elections on May 2, 2018.

7 replies on “No voter registration privacy in election law — Friday”