Sandals has no obligations to former Buccament resort staff 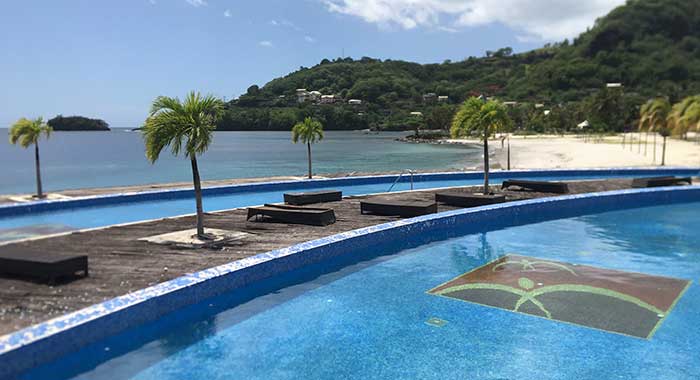 Workers at the former Buccament Bay Resort, the logo of which is seen her at a pool at the resort, are owed wages and severance pay by Harlequin, the former owners of the resort. (iWN photo)

Sandals Resorts International, which has acquired the former Buccament Bay Resort, has no legal obligation to the former staff, Minister of Finance Camillo Gonsalves noted to iWitness News on Wednesday.

He, however, said that the government also has no such obligation but does not operate in that way.

Buccament Bay Resort, which was owned by Harlequin, closed in December 2016, after its electricity service was disconnected for non-payment.

In the months leading up to this, workers had taken to the picket line over the non-payment of wages.

The company soon went into bankruptcy and workers are yet to be paid wages and salaries, even as the chairman of Harlequin, Britain-born, naturalised Vincentian is the subject of criminal proceedings in the United Kingdom and St. Vincent and the Grenadines.

Speaking to iWitness News on the sidelines of Wednesday’s singing ceremony between Sandals and the government, Gonsalves said:

“Well, legally Sandals doesn’t owe them (former Buccament Bay Resort workers) any obligations, nor does the state — and I’m speaking legally now so I don’t want the headline to be the government says they don’t owe anybody anything.

“Legally, their rights still exist against Harlequin, because Harlequin is the one who hasn’t paid them and there’s a process by which the bankruptcy trustee has to pay out debtors and creditors.

“But that is not the way in which the Government of St. Vincent and the Grenadines operates.

“So what we’re trying to do at the moment is to quantify the number of employees and the amount of money owed to them to get an idea as to the universe of what that number is, and then ascertain what we could do, not out of a legal obligation, but out of a belief that we want to assist particularly in this time of COVID.”

Gonsalves said that his government wants to have a discussion with the former workers but has raised with Sandals the issue of employment of these former workers.

“Additionally, we’ve had extensive discussions with the human resource personnel at Sandals, who are here today and explained to them that there were some very skilled, very well trained workers at this hotel, some of whom have obviously found other work in the intervening years, but have skills and in addition to skills, a knowledge of the property, and Sandals, which is intent on hiring over 700 people, has expressed an interest in rehiring those people once we get to the stage of an open resort,” the finance minister told iWitness News.