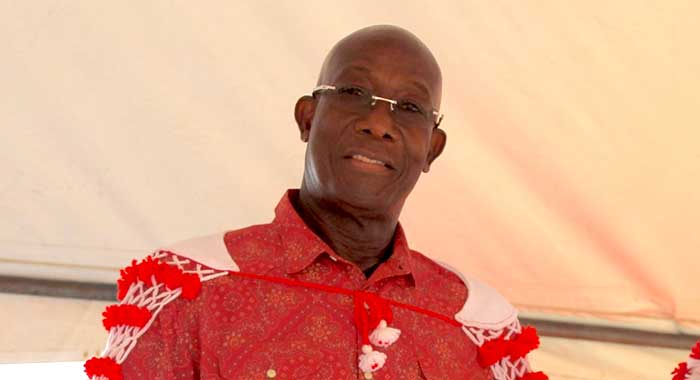 Port of Spain (CMC) — Prime Minister Keith Rowley Monday night declared victory for his ruling People’s National Movement (PNM) in the general elections and signalled immediately that the party is in a transition as he no longer expects to contest another poll in Trinidad and Tobago.

The Elections and Boundaries Commission (EBC) is yet to declare any preliminary results of the elections for the 41 seats neither has the leader of the main opposition United National Congress (UNC), Kamla Persad Bissessar conceded defeat.

She has said her party intends to challenge at least three of the seats won by the PNM.

Rowley said that the PNM had won 22 of the 41 seats in the Parliament, and if the results are confirmed, it would mean that the PNM lost one of the seats it had won in the 2015 general election when it defeated the then People’s Partnership government headed by Persad Bissessar by a 23-18 margin.

“Ordinarily we would have been gathered here in our thousands because tonight the People’s National Movement has won the general elections in Trinidad and Tobago, and when we win a general election we always say great is the PNM … and we shall prevail,” Rowley said from the party’s headquarters to a limited number of people that included his wife, Sharon.

The small crowd at the party’s headquarters is in keeping with the measures put in place to curb the spread of the novel coronavirus (COVID-19) and Rowley, whose speech was broadcast on radio and television here, said “tonight, against all odds, in a most difficult situation, the PNM has once again been called to service in the government of Trinidad and Tobago…

“So far as the results are in … but it appears that we went in with 23 seats  and we would come out with 22, a majority is 21, thank you, thank you for that support,” he said.

Among those winning seats in the election was Brian Manning, the son of the late prime minister and PNM leader, Patrick Manning, who comfortably won his father’s San Fernando East seat.

“Ladies and gentlemen I will return to office in Whitehall as the prime minister of Trinidad and Tobago. We have contested and we contested hard, but at the end of the day the prize was the majority of the seats to form the government and we once again have won the majority of seats.”

Rowley told supporters the future in Trinidad and Tobago is bright, we have some difficult days ahead but as dark clouds may bring showers, thunderstorms and lightening, behind that is the bright sunshine.

“Our projections are that the next two years will be difficult, very difficult, but during that period we are required to do certain things that will put us in a better position to enjoy the rest of that future which is guaranteed to us.”

Rowley, 71, hinted that he would not be contesting another general election, telling supporters that “this ladies and gentlemen could easily be my last term in politics in Trinidad and Tobago…

“I am not one of those politicians who believe when you come into office, you should go out feet first. I have places to go and people to see but, more importantly, I have a commitment to ensure that this is a period of transition in the PNM and as the longest serving member in the Parliament  … I have a duty and a responsibility during this term to fashion the PNM’s future by ensuring that our young people are developed in such a way that when I am no longer in this position to announce an election date that the country will not be deprived of the leadership it deserves,” he said.

“This is my period to ensure that the young people I have been mentoring that they move into greater responsibility during that period. So Trinidad and Tobago this is a period of transition but I will not shirk my responsibility to the people of Trinidad and Tobago who have elected me for this five-year period,’” Rowley said, telling the country that they should not all put aside their differences and come together for the betterment of the nation.