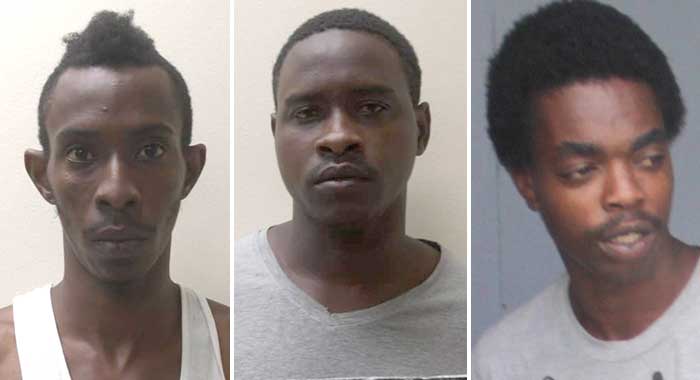 Police have arrested three men and charged then with various offences in connection with an alleged attempted burglary in Peruvian Vale during which police shot and killed one man.

On Wednesday, Jemark “Parch Nuts” Jackson, 27, of Campden Park, Quincy Boyde, 26 of Rillan Hill, originally of Ottley Hall, and Romando “Russian” Andrews, 29, of Clare Valley and Peruvian Vale, but originally of Diamond, appeared before the Serious Offences Court, where they pleaded not guilty to all charges.

Jackson was charged that on Aug. 9, at Peruvian Vale, he had, in his possession, one hoe reasonably suspected of being stolen or unlawfully obtained.

They were further charged that between Aug. 8 and 9, at Peruvian Vale, without lawful excuse, they damaged two deadbolt locks, valued at EC$120, the property of Harmony Investment Ltd., intending to damage such property.

They men were also charged that between Aug. 8 and 9, at Peruvian Vale, without lawful excuse, they damaged one commercial aluminium door, valued at EC$1,240, the property of Harmony Investment Ltd., intending to damage such property.

A fourth charge against the trio was that between Aug. 8 and 9, at Peruvian Vale, with intent to commit the offence of burglary on Triple St. Supermarket, did an act which was more than merely preparatory to the commission of the offence.

Senior Prosecutor Adolphus Delplesche objected to the men’s bail, telling the court that the investigators were trying to recover some exhibits and were fearful that the men could hamper such recovery, if granted bail.

He said that the lead investigator, detective Inspector Elgin Richards knows and had expressed that the men could not be held without bail “ad infinitum”.

“But he is asking for a little more time,” Delplesche said.

Chief Magistrate Rechanne Browne remanded the men into custody until next Monday, when bail will be reviewed.

On Thursday, Andrews and Boyd were brought before the same court charged with stealing EC$21,870 from Allan Smith Family Bakery and damaging a vault, valued at US$2,000.

Also on Thursday, police say that Keithan James of Campden Park died when they returned fire after he opened fire on officers who responded to the report of the attempted burglary in Peruvian Vale.

One reply on “Men charged over burglary in Peruvian Vale”