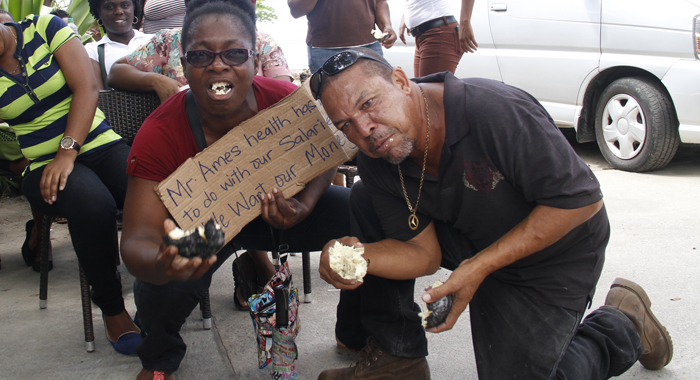 Then-workers at Buccament Bay Resort make their point during a protest over non-payment of wages on Dec. 3, 2016. Opposition Leader Godwin Friday says that the money owed to the workers should be given to them from Harlequin’s share of the resort sale deal. l(IWN photo)

Leader of the Opposition Godwin Friday says that the government should be responsible for paying wages, salaries and severance payments owed to former employees of the former Buccament Bay Resort.

“The government buying it (the resort), the government should be responsible. That is my view,” Friday said on his weekly programme on NICE Radio this past week.

He said that in its negotiations with Harlequin, the former owners of the resort, the government should have discounted from the amount of money to be given to Harlequin what is owed to the former workers and other service providers.

“The question is: who bears that obligation? I think the government, as a buyer, that is something they should have negotiated with Harlequin to say, ‘Well, okay, here is the price that you’re getting, we have to discount it by X amount of money because this amount will then have to go to those persons whom you owed. There are various ways you can address it in a negotiation,” the opposition leader said on his weekly programme on NICE Radio.

“But to say that somehow you’re not responsible, that those people — no legal obligation exists because of what? Somebody benefited from the services that those workers provided, those suppliers provided, somebody benefits from not having to pay severance pay as the law requires. So, if somebody has benefited, why it is the people who have lost have no redress. It can’t be right, it can’t be just; it can’t be fair.”

The government has acquired the resort, which has been closed since December 2016 and is selling it to Sandals Resort International.

“They’re buying the property from the various people,” Friday said, adding that the government, therefore, has an obligation to pay persons who were owed, including truckers and other service providers.

“… that can’t just be brushed aside and say well, ‘Ok. Sorry. Your loss.’ These are ordinary people, poor people,” the opposition leader said.

He, however, noted that the government has not accepted this liability.

“They’re simply saying that out of the goodness of our heart, we will try and see if we could find something — if in the money that we getting from Sandals, there’s something left over.”

The opposition leader said that it seems a common thread with the Unity labour Party administration that the poor get shafted because their voice is not loud enough.

“… but it gets louder as election day approaches,” Friday said, adding that he hopes his comments would cause the government, in this election season, to see his point.

“Because what I want most and foremost is for the people who have lost in this bargain that they be given, and I’m talking to local workers, and suppliers, that they’ll be given their just compensation,” Friday said.

He said that UK investors in the resort have gotten back 33% of their investment.

“But the workers here are getting zero and nobody feels obliged or legally bound to do anything about it. It’s just a matter of, you know, if we can or if we feel like it or if we find something, we get something. That’s not how it works, you know, when people work for you, they’re supposed to get paid.

The opposition leader said he had intimated that at the very least, if there is money that is made in the transaction, the government “shouldn’t pocket it, they should give it to the people who were owed money from the developers who were there — Harlequin — before and make sure that they get something from it.

“But more than that, that is not to say that there was no greater responsibility. The government ought to make sure that those people are paid. I mean, these are ordinary people who put in their service there. Some of them work and ain’t get paid, some of them their severance pay.”

“I agree with that,” Friday said of Thomas’ position.