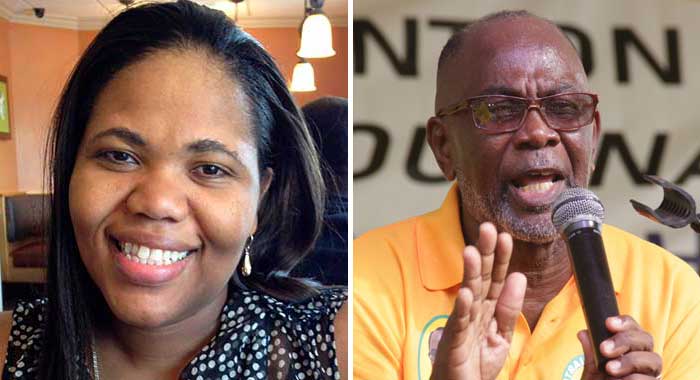 An opposition lawmaker has questioned the message being sent to citizens when the wife of a minister decided not to testify against a number of men who allegedly robbed her at gunpoint, reportedly as she held her son in her arms.

“… I want this to be on Saboto’s chest tonight and his family’s chest,” Member of Parliament for Central Kingstown, St. Clair Leacock told a virtual campaign rally of his New Democratic party.

The meeting focused on South Central Windward, where the NDP’s Israel Bruce, a lawyer, is trying to prevent Minister of Agriculture, Saboto Caesar, of the ruling Unity Labour party, from securing a third consecutive five-year term in office.

Leacock said that while he and Caesar get along well, “this is political history”, as he noted that the ULP, in its manifesto for the 2015 election, had promised to be “tough on crime and tough on the causes of crime”.

The Central Kingstown MP, who is also seeking a third term in office, said that he does not point fingers but asks “searching questions”.

“In his (Caesar’s) household … we had one of the worst atrocities of crimes in this country,” Leacock said, and mentioned the September 2018 robbery, the investigation of which led to police bringing murder and additional robbery charges against the accused robbers.

Leacock noted that the alleged robbers were arrested and charged.

“His (Caesar’s) wife, a decent, prominent citizen, can’t find a better professional than her, refused to give evidence,” Leacock said of Reisha Twana Browne-Caesar, the agriculture minister’s wife.

In July, as a preliminary inquiry was scheduled to begin at the Kingstown Magistrate’s Court, the agriculture minister was present when his wife, a physician, told the court that while she had not forgiven the alleged robbers, she was not offering any evidence against them.

In light of this, the Crown withdrew the charges.

“Her husband is a minister of government and a lawyer. Her brother [Minister of Health Senator Luke Browne] is a member of parliament; her sister [Chief Magistrate Rechanne Browne] is a senior magistrate and she decided that notwithstanding that insurance and coverage, they can’t protect her and she would give no evidence.

“The [alleged] criminals are [on the] loose. Tough on crime and the causes of crime? It’s a crime, it’s a crime when we, as parliamentarians can’t strike a blow for law and order and make a stand against the criminals in our society,” Leacock told the virtual meeting.

Meanwhile, on Wednesday, during his weekly appearance on the NDP show on NICE Radio, Leacock expanded on the point he made Tuesday night.

He noted that he is the representative of Central Kingstown, the heart of the city, “So I have a lot of street smarts and street knowledge.

“And I am, therefore, not unmindful of the fact of what harm can befall me. Who are the gunmen, as we say? Who are the people in political circles who have relationships with the underworld and can take me out and take you out just like that?”

He said that he who loves his life will lose it.

“And if we are going to become ministers of government, minister of national security, we have to make tough decisions. We are either there to protect the citizens of St. Vincent and the Grenadines or we are going to turn a blind eye to the criminal elements.”

Leacock said that several stories have been carried in the local media of people who have walked free, “who, on the preponderance of evidence and on the statements on the street, people know who committed these crimes, who killed these people.”

He said it has happened in his constituency and others, adding that he had had to call the commissioner of police and request that police protect a young lady in providing evidence or be allowed to leave St. Vincent and the Grenadines to provide the evidence.

Leacock said he had had discussions with a former director of public prosecutions about the witness protection programme “so that the criminal don’t continue to run free.

“But you can’t have situations in which a country reach to the stage where when a crime happens, a person turns their face in the other direction because if the criminal knows that you saw or you are aware, then you’re next, or all the witnesses in the programme are rubbed out and so a clear message is sent to the citizens of St. Vincent and the Grenadines, ‘This is bad man country. This is Jamaica.’”

He said that Jamaica Prime Minister Andrew Holness is not putting up with this in his country and is “standing up tall” having declared states of emergency and saying what has to be done to take back the country from criminal elements.

Leacock reiterated that he was not attacking Browne-Caesar personally or professionally.

“I have nothing against her. In fact, I have nothing but great respect for her and respect for the family, even Saboto family… I am not looking or a scratch back from them…. But, I am also a politician; one aspiring to represent the state.

He said that the country is in a bad way in many respects, adding that the police compounds in Kingstown and Largo Height are “stink, rotten, dirty”, even as they should be impeccable.

“St. Vincent is in a dark place with people who are providing promises and can’t deliver. Our standards are falling and we are too few in numbers to allow that because certainly there will be nothing left to hold on to,” Leacock said.