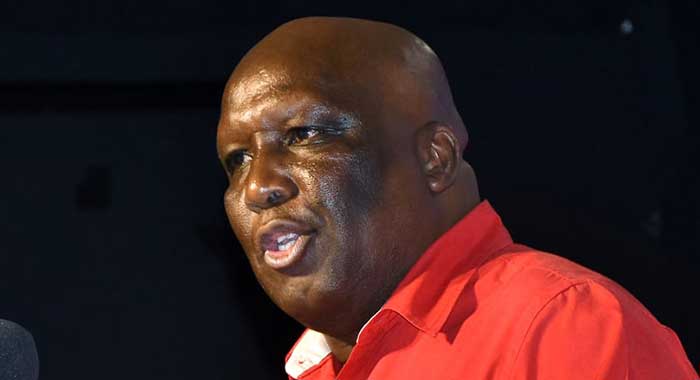 The Unity Labour Party administration has spent close to EC$3 billion on education since coming to office in 2001, says Minister of Education St. Clair Jimmy Prince.

“The PM did some maths this morning, and said since 2001, we have spent almost $3 billion — with a B — on education in this country,” the told the Unity Labour Party’s virtual campaign rally on Wednesday.

“Our annual expenditure on education is $150 million,” said Prince, who is seeking a second five-year term as Member of Parliament for Marriaqua.

Illustrating what he said is the progress that the nation has made in education, Prince said:

“I’m fond of saying once upon a time when you went to the doctor, you could understand what he was saying. He couldn’t understand you either. Nowadays you go to the doctor, the person attending to you, you know he mooma (mother) and he poopa (father). You know where he come from, where he live, which school he went to. It’s revolution, not just in medicine, in law, in other things.

Prince said that before the ULP came to office, “education was more a privilege than a right.

“Only 39% of all primary school children entered a secondary school,” he said, adding that the ULP would continue to repeat this, as “the people who presided over that should be ashamed of themselves.

“Some of them are coming back,” he said in an apparent reference to Bernard Wyllie, who is trying to unseat him on behalf of the main opposition New Democratic.

Wyllie has returned to electoral politics, 22 years after he was voted out of office as MP for Marriaqua, after two terms.

“Other people were left to fend for themselves,” Prince said of the students who did not make it to secondary school.

“University was an alien language; parents pulling strings to get their children into secondary schools, most of them private and costly. The education revolution and universal secondary education changed that and is changing the society as a whole,” he said.

“That’s the change we talked about. That’s the change. We want them to talk about how people live and what they live for,” said Prince, who noted that some persons were calling for a change in administration but said the call is “lame and weak”.

He said that since 2009 there have been massive advances in the early childhood education.

“Before we had some little pre-schools around the place. Remember? The government had nothing to do with it,” he said, referring to the era when early childhood education was totally a private sector undertaking.

He said an early childhood centre was recently opened in Greiggs and South Rivers, while four will come on-stream this year — in Richland Park, Biabou, Park Hill and Colonarie, bringing the total to 15.

“… early childhood centres to catch children at an age when we could develop them: the best time in their lives for them to be taught. The government is taking a lead in this. That’s revolutionary; that’s what we are talking about,” Prince said.

He said that the government has given income support to private pre-school operators under its COVID-19 stimulus package.

The education minister said that a lot of people were surprised by the achievement of universal secondary education in September of 2005.

“A lot of naysayers say we couldn’t do it. But the Prime Minister had a vision. We have done it,” he said, adding that new schools had to be built to make this a reality.

“And let me say something more, that we weren’t just building schools. We were concerned about what happened in the schools. And if you look at the CSEC results, you will see what I’m talking about excellent results over the years improving over the years.”

He said the education revolution was not just about the academic, as the flagship is technical and vocational education and training (TVET).

“We recognise that we have to develop market skills among young people to promote greater employment and productivity. The marketplace is calling for special skills that we can’t meet at the moment. We have known this for a while; we have been doing a lot of work with respect to technical vocational education and training,” Prince said.

He noted that there are four main technical centres — at Barrouallie, Campden Park, Kingstown and Georgetown.

“This too, was revolutionised. People grew up thinking that university education was for certain people, not everybody. You could have counted on one hand how many people we had at university at a particular campus.

“We have said, the prime minister said this over and over again, you should have one university graduate per household on average, by 2030. It will happen. We are working towards that goal right now.”

He said that SVG in terms of the number of students at the University of the West Indies campuses at Cave Hill, Barbados and St. Augustine, Trinidad and second largest at Mona, Jamaica.

“In addition, we have students all around the world studying in a range of disciplines. As a matter of fact, this morning, 22 of them accepted their scholarships to go to Taiwan,” Prince said.

He said that at the UWI open campus in Kingstown, there are over 735 students pursuing studies with 601 of them doing graduate or undergraduate programmes.

“This is more truly an education country. Everybody is involved. And you tell me this is not a revolution? A silent revolution, it is,” Prince said.

He said that the government had approved 250 tuition scholarships for 2020.

“In other ways, we have been supporting education; we’re putting our money where our mouth is. Over $100 million have been guaranteed by this government for economically disadvantaged loans since 2002,” he said.

6 replies on “ULP made SVG ‘truly an education country’ — Jimmy”