Layou woman first to be sentenced for breaking quarantine 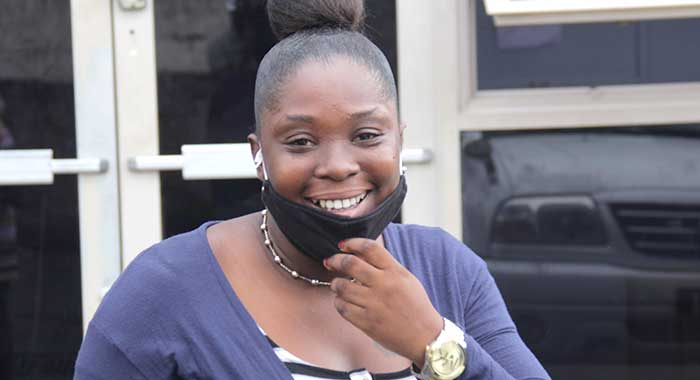 Tedicia Williams was handed a suspended prison sentence for her 11-day breach of quarantine. She is seen here after he court appearance on Friday. (iWN photo)

A Layou woman who breached her COVID-19 quarantine for 11 of the prescribed 14 days was given a suspended prison term, on Friday, when she became the first person to be charged under the revised Public Health Act.

Tedicia Williams, a 27-year-old, unemployed Layou resident must not commit a criminal offence for the next year, if she is to avoid serving her three-month jail term.

She faced a fine of EC$2,000 and six months in jail, with the magistrate noting that while the media had reported it was a fine or imprisonment, Parliament had in fact prescribed a fine and jail term.

Senior Magistrate Rickie Burnett handed down the sentence at the Kingstown Magistrate’s Court during a sitting in which a 78-year-old man was ordered to pay a fine of EC$500 forthwith for breaching his quarantine for about an hour.

Williams was sentenced two days after pleading guilty to a charge that on Sept. 19, at Layou, she contravened an order made by Dr. Roger Duncan, health officer, under section 27(a) of the Public Health Act, requiring her to quarantine herself from other persons.

Asked on Friday if she maintained her guilty plea, Williams said she was “guilty with an explanation”.

The facts of the case, as read by prosecutor Police Constable Corlene Samuel, are that that Williams arrived in St. Vincent and the Grenadines on Sept 19 aboard a One Caribbean airlines flight from Tortola.

On arrival, health officials informed her that she is required to quarantine herself for 14 days, five of which must be spent in a government-approved hotel.

Williams listed her intended accommodation as Spring Garden Resort but never went to the hotel, which is located about three kilometres from Argyle International Airport.

As a result, the police were informed and went in search of Williams and found her at her home in Layou.

Williams was informed of the offence of breaching quarantine and was arrested.

When cautioned, she did not say anything.

She was later charged.

Duncan told the court that when Williams arrived in the country, she was issued with a document detailing what was expected of her as it relates to her quarantine.

The health officer also said that Williams was issued with a document ordering her to quarantine for 14 days.

In her explanation, Williams told the court that she had told the health officials that she did not have any money to stay at a government facility.

She explained that she had told them that it was her family that had sent the money to her to return from the BVI.

“Then I get a ride and went home,” she said.

However, Duncan told the court that the protocol was “clear, unambiguous and say that if you are coming from a high-risk country, you have to spend 14 days in quarantine”.

He said the protocols say that that five of these days must be at a government-approved hotel.

The doctor said that in his experience at the airport, most people arrive with the intention to breach the COVID-19 protocols.

“… unless you insist and insist, people think they can get away with it,” the doctor said, adding that it is fine if someone chooses to endanger themselves and their family, but not the country at large.

“These are not risks that we want to take,” Duncan said.

He told the court that in instances where someone cannot afford to pay for their hotel stay part of their quarantine, the government will make and pay the arrangements.

Also the Immigration Department will confiscate the person’s passport until they refund the government for the hotel stay.

‘You have no excuse’

On hearing the doctor’s explanation, the senior magistrate said:

“Madam, it appears that you have no excuse for the position that was taken by you and as the doctor explained, it’s not just only you.

“I have heard your so-called explanation and I don’t think it amounts to a defence.”

In mitigation, Williams told the court that she is unemployed in SVG and had spent seven months in the British Virgin Islands, during which she did not work.

Asked the Ministry of Health’s view on the penalty prescribed by Parliament, Duncan said that the ministry has invested significant human and financial resources because of the potential impact of COVID-19.

He said that if health officials do everything they can and there is a breach like Williams’, it jeopardises everything that had been done.

The magistrate asked the doctor if he knew how courts across the region have been handling these matters.

Duncan said that in other jurisdictions, people are paying more for quarantine and even if a person has an apartment where they can stay, they have to pay for security.

The magistrate said he spoke to a colleague in Grenada to get a perspective on what is being done there.

Burnett further said that one of the things that the court has to bear in mind when sentencing a defendant is a means test.

He said if the court is going to impose a fine, it has to determine the means of the individual before imposing a fine.

He said he has done a means test and the defendant is in no position at all to pay a fine.

“So, a fine that’s out of the question.”

Burnett pointed out that the court couldn’t impose a fine with the intention that someone else would pay.

The senior magistrate noted that Williams had pleaded guilty at the first opportunity and, therefore, qualified for a one-third discount on her sentence.

“Are you sorry that this was done by you?” the senior magistrate asked the defendant, who responded in the affirmative.

The magistrate told Williams he was looking for something called remorse but was not so sure he was seeing that in her face.

He said there is a reason why parliament imposed fine and imprisonment for the offence.

“Parliament wants the court to treat with these matters in a particular way,” Burnett said.

The senior magistrate said the aggravating feature in this case, which was of a very high level, is that Williams put the country at risk by her behaviour.

“And that is most aggravating. It’s not only her family, she also put the country at risk,” he said, adding that there is a reason why COVID-19 is being managed in a particular way.