Luke was hoping for ‘that last showdown’ with Arnhim 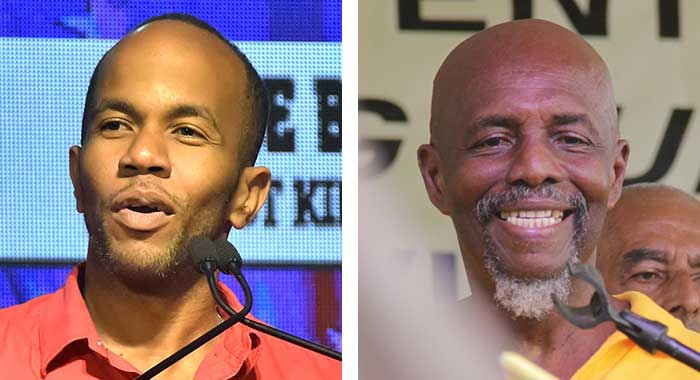 The Unity Labour Party’s (ULP) candidate for East Kingstown, Luke Browne says he was hoping for “that last showdown” with incumbent MP for the area, Arnhim Eustace.

However, Eustace, 76, a former prime minister, minister of finance and leader of the opposition, had, as early as 2016, indicated that he would not contest the upcoming general elections, which has been announced for Nov. 5.

Eustace’s 22-year stint as a MP for East Kingstown ended last Friday with the dissolution of Parliament.

On Thursday, opposition lawmakers, anticipating that the announcement of the elections was imminent, used the sitting of the national assembly to pay tribute to the elder statesman.

Speaking after the tributes by opposition lawmakers on Thursday, Browne, 36, said that with what was said, he took it that it was confirmed that Eustace would not seek re-election.

“He had initially announced that he would retire from electoral politics. And I think he thought subsequently that he’s not quite ready to be done yet. So he suggested that he will still be in the political fray,” said Browne, who was a senator for the ruling Unity Labour Party (ULP) in the last Parliament and is Minister of Health.

Browne said that with Thursday’s messages of a political send off, it was confirmed that Eustace would not contest any further political races.

“I should say that I greet this news with mixed feelings because I thoroughly enjoyed the clashes that I had with him at the polls before.

“And you notice that, Mr. Speaker, we made particular progress in the outcome of our elections. And I was hoping that he would give me the opportunity for that last showdown, which no doubt, may have resulted in his retirement anyway.”

“Mr. Speaker, it has been further said that the Honourable member is the long standing, you may say, representative for the constituency of East Kingstown, which happens to be my constituency.

“It means that he has been my representative for all these years. I wouldn’t venture from the floor of Parliament today to comment on the fruits of that representation.”

Browne added that there is a photograph that was “popularised some time ago” of Eustace handing over a trophy to Browne at his high school graduation.

“I think he was either the Minister of Finance or the Prime Minister at that time when I was graduating from the St. Vincent Grammar School, and very poetically, he was captured handing over a trophy to me at that graduation ceremony.

“And I believe, Mr. Speaker, that history will repeat itself, in that I will be his successor, in the seat of East Kingstown.

“All said, I wish him the best with his retirement. We have had our political contests and crashes. I have never had any ill will towards him as a human being and as a person. It was a battle of ideas and a battle to see who may be able to shape and mould the future of our constituency, which I hold dear to me and in which have spent all my life.

“I wish that he would be able to reflect on the future course of that constituency. And maybe he may comment approvingly on my representation thereof before he departs this land,” Browne said.

Browne is pit to face off with the NDP’s Dwight Fitzgerald Bramble, a first-time candidate, in the Nov. 5 poll.