‘Finance is in place’ for Sandals in Buccament Bay — deputy chairman 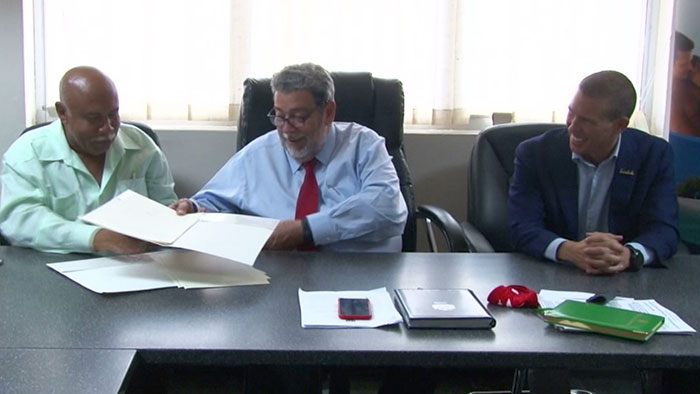 Sandals Resorts International and the Government of St. Vincent and the Grenadines, on Monday, signed a commencement contract for the Beaches Resort, at the former Buccament Bay Resort.

Stewart said their team left SVG on a high after their July visit, when another agreement was signed.

He said the resort’s design will be inclusive on every level of the development that everything at this point is still conceptual, and that interior designs are yet to be finalised.

Stewart explained that Sandals’ SVG resort will be the first of their chains to debut several features, including, glamping.

“Glamping” is a portmanteau of “glamorous” and “camping”, and describes a style of camping with amenities and, in some cases, resort-style services not usually associated with “traditional” camping.

He said these types of accommodation will be located on the backside of the property and will feature the most premium rooms.  There will also be spa treatment rooms along the river, of which, Stewart said provides a “beautiful opportunity”.

According to Stewart, the Sandals SVG Resort construction is scheduled to commence in April 2021.

About 1,000 workers will be employed at the peak of construction and the proposed opening date is December 2022.

He thanked the prime minister and his team for “facilitating us today” at the meeting, which raised concerns about whether the nation’s COVID-19 protocols were broken to facilitate the talks.

“We felt that we’ve achieved.  We still have a lot of details to go through but we’re well on the way now.  Finance is in place for the development, our wider team knows about it.  We’re in the press constantly… St. Vincent is the future.  And that will carry on until we really ramp it up 6 months to opening.  It’s gonna be amazing.  I want you to rest assured that we’re gonna build something here that is second to none anywhere in this part of the world,” Stewart said.

Gonsalves described the master plan for the resort as “good stuff”, adding that he is “looking forward to the boots on the ground in April,” a reference to commencement of construction work.