Even as SVG sits on the UN Security Council… 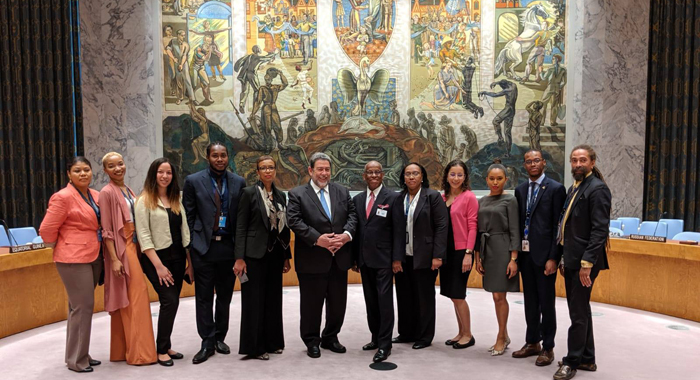 Prime Minister Ralph Gonsalves and other members of the SVG delegation inside the chamber of the UN Security Council in June 2019. (Photo: Camillo Gonsalves/Facebook)

As I drove home from work on Monday, I happened to hear the closing minutes of a global media conference hosted by Prime Minister Dr. Hon. Ralph Gonsalves. When I realised that it was an event held to mark SVG’s ascension to the presidency of the United Nations Security Council, my heart swelled with pride! Our prime minister was on the world stage. I became even more excited when I heard Dr. Gonsalves reminding the global media that SVG was the smallest nation ever to be elevated to this position. The press briefing soon came to an end. I continued on my way and began to reflect on the state of the country today even as I applaud our prime minister for this momentous achievement.

As I reflected, a few sobering thoughts came mind. Earlier in the day, I had an encounter with a young mother of two. Given the nature of my current occupation, she was seeking some financial assistance. It turned out that she had not had steady employment for more than a decade. It was, as she indicated, a serious struggle, to keep her children fed and schooled. Clearly, this lady was among the poorest of poor in this country. Then, this question popped into my head: How does elevation to the presidency of the UNSC help this lady?

Then, I thought of the recent “poverty assessment report” purportedly leaked to the press by opposition. According to this report, the country has sunk significantly into poverty and indigence over the past 10 years or so. Yet, this situation may have been hidden by the authorities since they are yet to officially release the said report compiled since 2018. Again, I wonder how a seat on the UNSC translates into benefits for the country such that the problems of poverty and indigence could be alleviated. So, as the prime minister struts about the world stage with his head held high, a significant section of the population wallows in poverty. There is something wrong with this picture!

There is a phrase in Vincentian parlance called “poor bragging”. It refers to a state where an individual who lacks merit and substance often engages in the practice making grandiose statements about whatever worth they may wish others to think that they have. Essentially though, they are just empty barrels. Likewise, it is clear that SVG’s place on the UNSC and the soaring rhetoric of Dr Gonsalves connected thereto, is a classic case of good old Vincy poor bragging!

So, even as we rightfully share the pride of the UNSC elevation, here is a message for our prime minister: Poverty stalks the land and there is nothing that the UNSC can do about it. Give us a break!