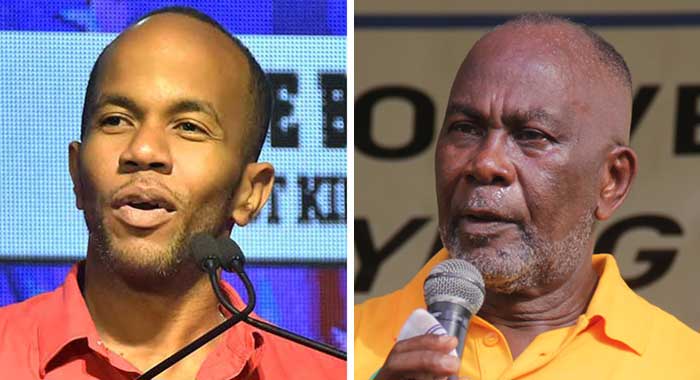 New Democratic Party vice-president St. Clair Leacock has welcomed the victory of Dwight Fitzgerald Bramble, his party’s candidate in East Kingstown, and described his opponent, Luke Browne, as the most disrespectful person in politics in St. Vincent and the Grenadines.

In the Nov. 5 general elections, Bramble, a first-time candidate, defeated Browne, who was making his third attempt to win the seat for the Unity Labour Party.

During the campaign, Browne described Bramble as a “Johnny-come-lately” who will not be allowed to impose himself on constituents.

“Plenty thing ain’t talk yet. But there’s a lot of thing to talk in this election campaign. Because if anybody feel that they can impose themselves on the people of East Kingstown, anybody without scruples or morals or anything at all, going to impose themselves on the people of East Kingstown, going to come from where they come from, and interrupt a process and a programme, which is intended to deliver maximum benefit for the people of that constituency, they wouldn’t be coming up against Luke Browne, they will be coming up against the electorate, and the electorate will speak with a vengeance,” Browne said during a campaign even in July.

“I am glad that Fitz won and won so comfortably in East Kingstown, because of all the people in this election, I think he had the most vilification, the worst character assassination and from people and households who have no authority, none whatsoever, to speak derogatorily about him,” Leacock said on NICE Radio on Monday.

Leacock noted Browne comments in Parliament on Oct. 8, when opposition lawmakers paid tribute to former prime minister, minister of finance and opposition leader, Arnhim Eustace, on what turned out to be his penultimate day as an MP.

Parliament was dissolved the following day, bringing to an end Eustace’s 22 years as MP for East Kingstown.

The 76-year-old economist did not seek re-election.

Leacock said that Browne, a senator and minister of health in the last government, “felt compelled” to make a statement in response to the tributes.

“You would think that he would want to say, ‘Mr. Eustace, I’ve been grateful to be here at your feet for the last so many years and to learn from you and to wish you good health and retirement.’

“The arrogance and ignorance and rudeness had to go on. ‘But I’m sorry, you couldn’t run a third time so I could beat you.’ That’s him speaking,” Leacock said of Browne’s comments.

“I never spoke to Sir Vincent Beache like that you know, even though they are people who fired me, but I always felt that his five, 10, 15 years on me, gave him a certain degree of respect,” Leacock said, referring to a former minister of national security, who died last year.

Leacock said that during the electoral contest, Bramble, an economist and former educator, national footballer and diplomat, “asserted that the values and the character were imbued in him by his parents, his mother”.

He said Bramble’s mother must have been proud of him in that he was prepared to leave his job and “secure future” in Canada and return to SVG to enter politics.

Eustace has been battling ill health for the past few years and now uses a walking cane.

“So much of what is there for Fitz is also a reflection and depth of gratitude they have for Mr. Eustace,” Leacock said, adding that it was also a reflection of appreciation for Eustace’s predecessors, Carlyle Dougan and Eddie Griffith.

“… because that constituency has been well served from 1984 by some of the best characters, politician and men of stature in the New Democratic Party, from Eddie Griffith to Carlyle Dougan now to Fitz Bramble.

“And I have no doubt that he will be a tremendous compliment to the New Democratic Party and to Dr. [Godwin] Friday and his team.

“So I am taking this opportunity again to thank the people East Kingstown on his behalf,” Leacock said.

One day after the election, a video emerged on social media of an inconsolable Browne crying as he was being surrounded by party supporters, some of who were chanting his name.

On Tuesday, in Kingstown, at the swearing in of the Cabinet, Prime Minister Ralph Gonsalves said Browne will be going to London soon to do his professional law exams and will return within a year.

11 replies on “Luke was SVG’s most disrespectful politician — Leacock”