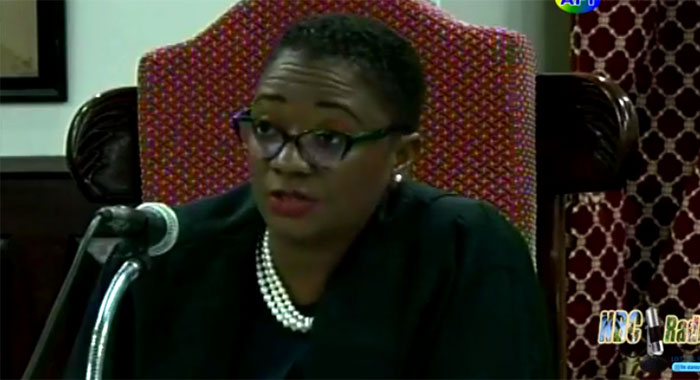 The first female Speaker of the House of Assembly in St. Vincent and the Grenadines, on Monday, put her marker down as she urged MPs not to equate “a particular gender” with weakness.

Rochelle Forde, a lawyer and former senator and deputy speaker, was elected speaker of the national assembly in a vote as Parliament convened after the Nov. 5 general elections.

Forde was nominated by Prime Minister Ralph Gonsalves and defeated the opposition’s nominee, Kay Bacchus-Baptiste, by 14 votes to eight.

Ashelle Morgan, a lawyer and government senator, who Gonsalves nominated as deputy speaker, was confirmed in that post, after the opposition did not put forward a nominee.

In her first comments as speaker, Forde thanked the Lord for “His continued blessings and mercies on us all as a nation” and asked His “unending guidance and grace throughout the life of this Parliament”.

She congratulated all elected and appointed members of the house, saying, “I am confident that you will work harmoniously as we fulfil the mandate of the people whom we are all here to serve.”

The speaker thanked MPs for their words of congratulations, adding,  “I am humbled that by your actions my name will be etched in the historical archives as the first female Speaker of the House of Assembly in St. Vincent and the Grenadines.”

She noted that the occasion was “doubly special” in that for the first time in its history, both the speaker and deputy are females.

“It is indeed a day of celebration but what will be of greater import is a parliament exemplary in the conduct of its affairs, one exhibiting an ever-evolving maturity, commensurate with its rate of existence,” Forde said.

“In great part, our Parliament has performed creditably but in some instances, the journey ahead still remains a long one. I — as I am sure is the sentiment and expectation of the vast majority of our nation’s people — am looking forward to healthy, constructive, lively debates, fused with moments of levity. I encourage it.

“However, it will be done within the parameters of the Standing Orders and the confines of decency. What a distasteful irony it would be if Parliament, the law-making body of our nation fails to follow its own rules.

“Thankfully, I comfortably rest in the confidence and ability of you, the members, secure in the knowledge that such an irony will not disturb this august body. Having said that, I urge you, let us not make the mistake of trying to resurrect an old, misguided stereotypical myth, which in its folly, somehow equated a particular gender with weakness,” Forde said.

“Happily, as demonstrated today on both sides of the aisle, that theory continues to be debunked. We will forever be guided that the business of the house is the people’s business and this is a parliament of rules.”

Forde said she has spoken with the prime minister and Leader of the Opposition Godwin Friday and on Dec. 17, at 10 a.m. “sharp” there will be, at the assembly chamber, a private meeting with sitting parliamentarians and staff only, “to familiarise members and or to re-familiarise members with the standing orders of the house of assembly.

“This is a working Parliament,” the speaker said and encouraged all MPs to attend.

“This is a pivotal moment in the development of our country. The world continues to look at our nation state in awe and with admiration. Our citizens depend on you to be the embodiment of hope for tomorrow. Let us together, with sophistication of thought and patriotic conviction continue to build St. Vincent and the Grenadines,” Forde said.