MPs to debate 2021 Estimates in January, Budget shortly after 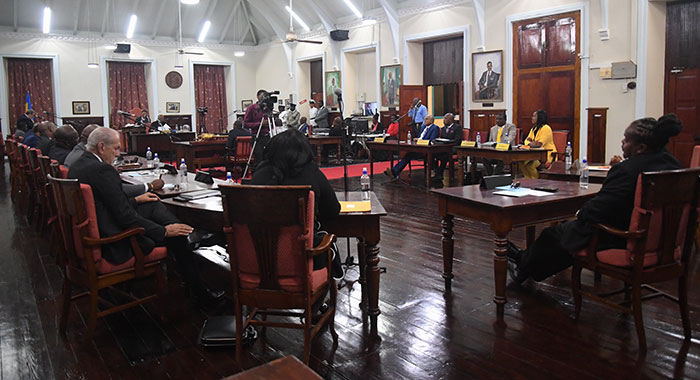 The 11th Parliament during its first session on Monday. (Photo: S. Ollivierre/API)

The Estimates of Revenue and Expenditure for 2021 will be presented in January, to be followed shortly after by the Budget, Prime Minister Ralph Gonsalves told Parliament on Monday.

“The preparation is ongoing. The period of the elections, understandably, caused some delay, certainly at the policy level but the public servants were at work looking at all the various options in relation to the budgetary process and discussions were going on with that,” the prime minister said as lawmakers met for the first meeting of the 11th Parliament, which resulted from the Nov. 5 polls.

The prime minister said that, as a consequence of this, he was not in a position to move a motion for the house to be adjourned to a specific date.

“But I am very mindful that the Constitution mandates that the Estimates of Revenue and Expenditure for the particular year must be presented within one month of the financial year, which means that we have up to the end of January to present the estimates,” Gonsalves said.

“It isn’t that nothing can be done in the meantime because the law also provides for up to one-12th of the expenditure of a recurrent nature to be one — up to one-12th, and also capital spending of any amount under the warrant of the Minister of Finance. So I just state what the rules are so that no one would get the feeling that the business of government doesn’t continue,” he told lawmakers.

In February, Parliament approved an EC$1.2 million fiscal package for 2020, which Minister of Finance, Camillo Gonsalves said was “an ambitious attempt to accelerate the economic transformation” of St. Vincent and the Grenadines.

The budget represented a 9.1% increase over the 2019 fiscal package, and included an EC$2 million current account surplus.

The EC$311 million in capital expenditure was another record high category, 34% of which was devoted to climate resilience, disaster response and renewable energy.

The finance minister had also allocated EC$16 million for solar and geothermal energy projects, while EC$31 million –1.4% of GDP that was held in the Contingencies Fund.

The figures provided for a 2% salary increase to government workers, placing salaries at 4.5% higher than at the start of 2017, even as wages to low-wage part-time employees who clean or prepare meals at government facilities will increase by 25%, the minister had said.

One reply on “MPs to debate 2021 Estimates in January, Budget shortly after”