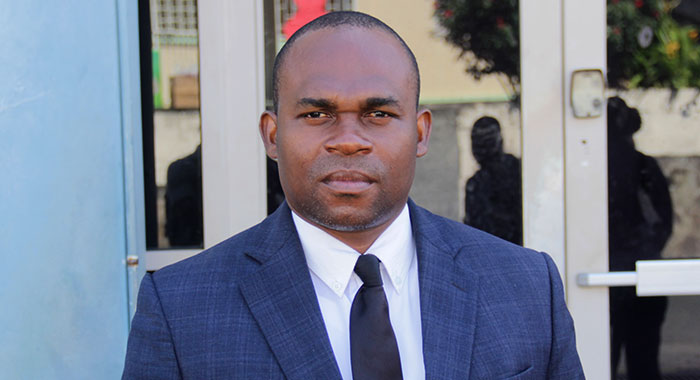 Cato made the call as the court contemplated a sentence for Shadene Farrell, 29, of Lowmans Leeward, who had pleaded guilty to a charge of impeding the apprehension of accused murderers, Veron Primus and Ulrick “Chucky” Hanson, who escaped from Her Majesty’s Prisons (HMP) last week.

Farrell, who has an intimate relationship with Primus, which she said began via telephone in June, while he was in prison, harboured the two men at her rented apartment in the West Kingstown community, for more than 24 hours before they were apprehended.

She even went to Kingstown and purchased a cell phone for Primus with EC$150 that she said he had given to her after his escape.

Asked for his perspective on the matter, the prosecutor said that it was puzzling that Farrell had told her best friend and housemate, Ayesha Holder, that Primus and another man were at her house and she wanted to call the police but she had no phone.

Holder, who is Primus’ brother’s girlfriend, was not at the apartment during the time the fugitives were there.

Cato further asked Farrell why she did not go to the police station when she purchased the phone at Little Tokyo, Kingstown, sometime before the men were recaptured Thursday morning.

The prosecutor observed that Farrell had an opportunity to go directly to the same police, who she had said she wanted to call but could not have.

Farrell, however, told the court that she did not go to the police because they would have carried her back to the house during the apprehension.

After her arrest last Thursday, which followed that of the two fugitives also on Thursday morning, Farrell gave police a five-page caution statement detailing how the relationship between she and Primus developed and what happened at the house after the fugitives arrived there after 5 a.m. on Wednesday.

The prosecutor said that the caution statement was very helpful and gave a proper picture of the relationship between Farrell and Primus.

The magistrate said that the caution statement suggested that Primus was Farrell’s “friend, in a particular way”.

“He was your boyfriend — from a distance” the magistrate further said, but Farrell said they were “friends”.

Cato said he did not know why Farrell was “trying to hide it now”, adding that she was having phone sex with Primus — a prisoner.

In the caution statement, Farrell said she had had unprotected sex with Primus at his request at the apartment after his escape and that he slapped her twice after finding condoms at the apartment and accusing her of using them with another man.

The woman also told the court that she and Primus used to have phone sex while he was in prison.

The magistrate said that Farrell knew that everything she did was wrong.

The magistrate told Farrell that she was not as innocent as she wanted to appear to the court.

Cato noted that the men went to Farrell’s house after their escape and slept there.

The magistrate said there must have been a reason why they went there.

Cato noted that the men never moved and slept at the house when the sun was down.

Farrell had told the court that when the men arrived at the apartment at 5 a.m. on Wednesday she had told them they could not stay there, but Primus had said that the sun was rising and they could be shot.

The prosecutor noted that Farrell had pleaded guilty and was, therefore, entitled to a discount on the sentence that the court was contemplating.

He, however, said that the court needed to send a strong message to the public.

“Phones are in prison and there is a confession that she’s talking to a prisoner on a phone,” Cato said.

He said that the court needed to send a strong, general message that these types of offences are unacceptable and not tolerated.

The magistrate said he wondered if someone has ever been charged with an offence like that with similar facts and circumstances.

Cato said he has been in court since 2000 and could not recall any.

He emphasised that a phone had been taken away from Primus in prison and Farrell went to a telecommunications company and had replaced and organised for it to be smuggled into the prison.

Farrell said she had given the SIM to “a young boy” to take into the prison, but could not recall who he was.

“I’m sorry, but I don’t think you can escape prison for this offence,’ the magistrate said, adding that the only thing was to determine the length of sentence.

The magistrate said that with the mind that Farrell has, the court has to do something.

“So no ifs or buts; you are going to prison,” he said, adding that while the woman was entitled to a discount on her sentence, the aggravating features may erase the possible discount.

After suspending the sitting while he contemplated the sentence, Burnett sentenced Farrell to one year in prison, half of the maximum.