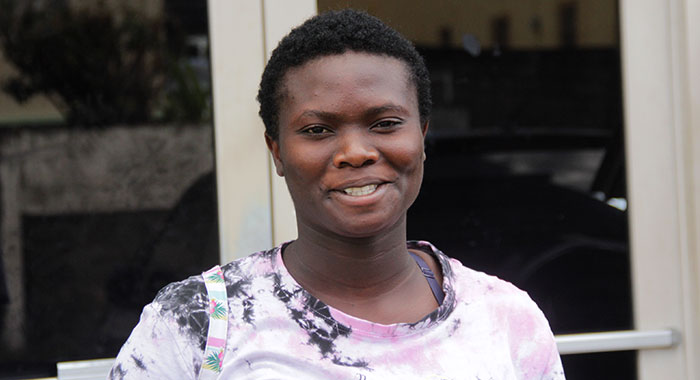 The Lowmans Windward woman charged with breaching quarantine will know on Jan. 5, 2021 whether the Crown has made out a case against her.

When the trial continued at the Kingstown Magistrate’s Court last Tuesday, Dec. 22, defence counsel Israel Bruce asked Senior Magistrate Rickie Burnett to find that his client, Jeyandra Jackson, 24, had no case to answer.

Jackson is being tried on a charge that on Oct. 27, she contravened an order made by Duncan under section 27(a) of the Public Health Act, requiring her to quarantine herself from other persons.

None of the Crown’s witnesses, including Duncan, was able to produce any documentary evidence that Jackson was given an order to quarantine at home for nine days, after her five-day mandatory hotel stay.

In his testimony on Tuesday, Duncan told the court that the documents are electronic and are “like our holy grail”.

“Anything goes wrong, that’s where we go,” he said, adding that he could not tell the court every single recording in the system was done “carefully”, a word he had used to describe the data collection process.

Duncan said that it is a requirement that each passenger be given an order detailing the location and length of the quarantine.

He, however, said that he did not have a copy of the order that was given to Jackson but health officials treat the records with the level of seriousness that they treat health records.

Therefore, if the system says that an order was issued, health officials would treat it as one having actually been issued, Duncan said.

But Bruce, in cross-examining the witness, asked if it was possible that the system could say that a quarantine order was given, but that, in fact, was not the case.

Duncan said it was possible, but “very, very unlikely”.

Asked, if he could not say that Jackson was given a court order, how could he say that she breached such order, Duncan told the court that Jackson “clearly knew she was in quarantine.

“Ms Jackson contacted us –” Duncan was saying, then sought the court’s permission to access his phone.

However, Bruce objected, saying that if Duncan had something on his phone that was helpful to the Crown’s case there was a proper way to present the information to the court.

Meanwhile, in her evidence, Latoya told the court that the accused had spent the nine days in-house quarantine on the ground floor of Latoya’s house.

Latoya said she was not at home when the defendant arrived on Oct. 27, but when they saw each other the following day, she told the defendant not to leave quarantine, because she could be charged and fined.

The witnesses said that to her knowledge, the defendant did not go anywhere during the nine days.

Latoya, though called as a witness for the Crown, came across as uncooperative, and at one point, told the court that she could not recall what she had said in her statement.

When the prosecutor asked her if she wanted the court’s permission to refresh herself, the witness said no.

And, the detective whose investigation led to the charge against Jackson read a caution statement in which Jackson said that she had gone to Rabacca to a Unity Labour Party rally on Oct. 27, a day on which health officials said she should have been in quarantine.

The detective said he could say that Jackson breached a court order because she told him during an interview that she “signed a document”.

“She said a document,” Soleyn replied, but did not answer a question about whether he could say that health officials had handed Jackson a document with her name and address filled in, indicating that she was to quarantine herself.

Bruce argued that there was no evidence to substantiate the case against his client.

He said that while the Crown claimed that Jackson had breached an order of the court, the prosecution had not provided any evidence that such an order was given.

“The Crown is saying that Ms Jackson was given an order which she was mandated to follow, by law,” he said, adding that what was tendered in evidence was a blank document addressed to no one of any address.

The lawyer said that the Crown had tried in many ways to stitch up its case, including by bringing Shernee Mc Dowald-Mc Donald, a registered nurse, who told the court that she had informed the defendant twice that she had to remain at home for nine days after her in-hotel quarantine.

Bruce, however, noted that when the nurse’s statement was put to her, nowhere therein did she indicate that she had so informed Jackson.

The lawyer said that even if Mc Dowald-Mc Donald had so informed Jackson, that information was not an order of the court.

‘sum total of the message’

He said that this position of the Crown is further damaged because Mc Dowald-Mc Donald later told the receptionist at the hotel in which Jackson did her in-hotel quarantine to tell Jackson that her COVID-19 test was negative and she could go home.

He said that the crown had attempted to use Latoya to buttress its case, but the witness said she had told her cousin to stay at home and not breach her quarantine.

She said that Latoya did not give evidence saying she had told the defendant to stay at home for nine days.

He said that even if the witness had said this to the accused, it was not an order of the court.

“It doesn’t stand on any ground,” he said, adding that the big question is that the state instructed Jackson, via a court order, that after leaving the hotel she had to spend an additional nine days at home, and in not doing so, she was in breach of quarantine.

“There is no evidence before the court of such,” he said, adding that his client does not have a case to answer, “because there are not just lacunas in the crown’s case, there are gaping holes”.

Bruce said there is no reason why his client should be further bothered by the case.

“The people who should be bothered are the people in our health care system who need to go and tighten the screws, procedurally, and make sure they protect St. Vincent and the Grenadines.”

But in response, the prosecutor, Crown Counsel Shackell Bobb said that Bruce, in his application, had not stated the standard of evidence that was required at that stage.

She said that the court had to determine whether a prima facie case was made out, and that it was her submission that the crown had made out such a case.

Bobb said this is buttressed by the evidence given by the witnesses and Jackson’s caution statement, in which she said she did leave her house to go to the ULP rally in Georgetown.

The crown counsel also said there was the evidence of the nurses, Mc Dowald-Mc Donald  and Daynia Clarke, who said that they had told Jackson to stay at home for a further nine days.

The prosecutor argued that the major issue was one of credibility and reliability of the witnesses.

“We can look at all the other issues, the surrounding circumstances that counsel mentions but we, in fact, have evidence to suggest that the defendant committed an offence,” Bobb said.

However, the magistrate asked Bobb to address the court on the issue of the medical officer’s order, saying he prefers to refer to it as such rather than as a court order.

Bob admitted that the prosecution did not have a duplicate copy “of the order that was issued”.

She noted that Duncan and the nurses had said that they do not keep a copy, but Duncan said that where there is a record in the system that says an order was given, they would treat the information as an order that was, in fact, given.

The prosecutor did not agree that the blank order tendered in evidence was the one given to Jackson.

She said that when Clarke spoke to the blank copy of the order, he said there was no space on the form on which the defendant would sign, as the defence had put to the witness.

She said this is why the investigator had brought the form to show there was no place on the form where the defendant would be required to sign.

2 replies on “Major ruling in quarantine case on Jan. 5”