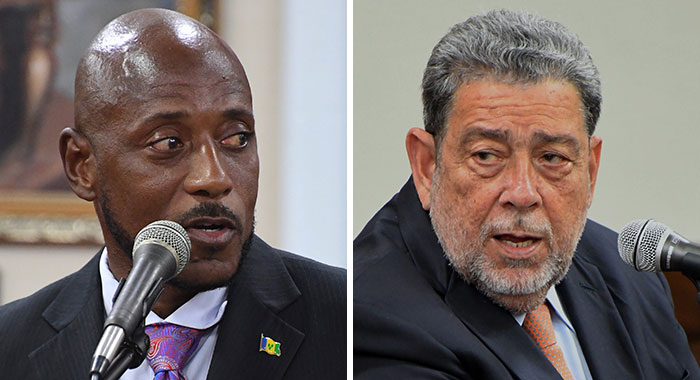 Prime Minister Ralph Gonsalves has crossed sword with one of the nation’s former diplomats who is now a lawmaker over a promotion in the foreign service.

In his contribution to the debate of the Estimates of Revenue and Expenditure, on Tuesday, Gonsalves responded to Bramble’s assertion that the government had allocated “a paltry two-point-something per cent for foreign affairs and foreign trade.

“And he say you need an imaginative foreign policy. He must have a conscience,” Gonsalves said of the opposition lawmaker.

“He was a diplomat. We made him, this government made him, the man who is talking here, made him the number two man at the embassy in Washington and he knew the new directions in foreign policy,” Gonsalves said.

However, Bramble stood on a point of order.

“The prime minister is misleading the house. When I was appointed as the number two man in Washington it was under the NDP’s administration,” Bramble said.

“You didn’t keep me. Not you,” Bramble retorted.

“I didn’t keep you there?” Gonsalves said.

“Who kept you there?’ Gonsalves said.

“I kept myself because I serve the people of this country well,” the opposition lawmaker said.

“Oh come on. Come on,” Gonsalves said, adding, “Those posts are in the remit of the Prime Minister you know that. You know that.

“And when you go into Suriname,” Gonsalves was saying as Bramble interjected something that was indiscernible on the broadcast.

“No, no but you raised it and when you going to Suriname I say yes,” Gonsalves said, as Bramble commented that the issue of his appointment was immaterial and that the prime minister is wasting time.

“I’m not wasting my time,” Gonsalves responded. “I am just saying to you that you knew the difference in the foreign policy. … I have to say it because you got — you see you can personalize it and then seek to depersonalize it.”

“You say you know this estimate inside out because you were senior project officer. And you said, well, when you come in foreign policy, I have that expertise because I was the deputy in Washington and I held posts elsewhere. So I’m saying that because of your personal involvement, not to take credit for it, that you will know the difference in the foreign policies and you told me that too. You on the different side but you don’t have to go there, man.”

Gonsalves said that after hearing Bramble’s contribution to the debate, “I came to the conclusion — if this is the basis of your understanding of economics and the estimates it’s a species of obeah (voodoo) economics where the arithmetic don’t add up.

“It’s as though you know, you are to economics what the Nigerian pastor in England is to theology,” Gonsalves said in apparent reference to a Nigerian prophet who made certain allegations against him and gave him three days to hold up a Bible.

Bramble again said something indiscernible from across the floor and Gonsalves responded:

“I’m not keeping trying. The runs, the runs that I have made up, put up on the tins; you could never get to meet them,” said Gonsalves, who has been prime minister since March 2001.

“Keep trying,” Bramble responded, adding, “My record speaks for itself.”

“I don’t want to talk about your record,” Gonsalves said.

Bramble was elected MP when he defeated former senator and health minister Luke Browne, of Gonsalves’ Unity Labour Party, who was making his third attempt to wrest from the NDP the seat it has held since it was established in 1984.