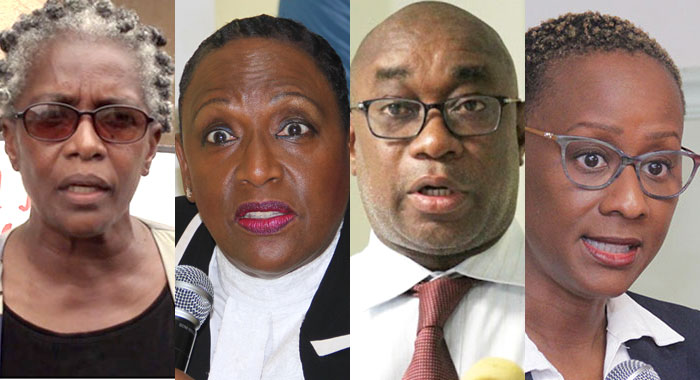 A lawyer for activist Luzette King says two senior health officials have given “opposite” responses regarding her application to quarantine at home, rather than having to pay for a stay at a government-approved facility.

King, 67, of Mesopotamia/Campden Park is before the court on three charges related to an incident in which, according to her, she “ran to hell out” of Argyle International Airport (AIA) on Jan. 30.

Kay Bacchus-Baptiste, one of King’s lawyers, told the court, on Thursday that while Medical Officer of Health Dr. Roger Duncan told the court that King’s application for an exemption was yet to be processed, Chief Medical Officer Simone Keizer-Beache had said that the waiver had been denied.

On Tuesday, when the first charge was put to King during a virtual sitting of the Serious Offences Court, Chief Magistrate Rechanne Browne granted bail in the sum of EC$2,000 with one surety.

The prosecution did not object to bail, but the chief magistrate said she was concerned about King’s quarantine, in light of the Ministry of Health protocols.

Among other things, the protocols mandate that each person entering St. Vincent and the Grenadines must quarantine at a government-approved facility for 14 days, at their cost.

At Tuesday’s hearing, Kay Bacchus-Baptiste, one of King’s lawyers, asked that Duncan appear before the court on Thursday, so she could ask him some questions.

On Thursday, in another virtual sitting of the court, King was slapped with an additional two charges, to which she also pleaded not guilty.

In his comments to the court, Duncan said that he was aware that on Feb. 1, King applied to be exempted from quarantine at an approved facility and to do so by herself at her home.

The doctor said there had been no response but he was advised that King was communicated with via telephone and it was indicated to her that there was a “significant backlog” and that her application was yet to be processed.

He said that King arrived in SVG before a response was given.

The chief magistrate pointed out to King that during Tuesday’s hearing, King had indicated that she arrived in SVG without hearing anything about her exemption.

However, Bacchus-Baptiste told the court that she was the one who had requested that Duncan be present because she wanted to ask him some questions.

The lawyer noted that her client was in a different location from her, adding that her instructions are that King was told that health authorities were looking at the application.

“She was never told that there was a backlog,” the lawyer said.

Bacchus-Baptiste said that it was after King had asked several times that the health authorities admitted to having received her application.

The lawyer said that she had asked that Duncan attend the hearing and had later written to the Director of Public Prosecution, asking that the Chief Medical Officer, Dr. Simone Keizer-Beache also be present.

“The reason was what Dr. Duncan just said is opposite of what the CMO said to me when I spoke to her. So I am very confused as to what the situation is,” the defence counsel told the court.

Bacchus-Baptiste said she wanted to ask Duncan a few questions as he had signed an order which, as the court agreed with the defence, was not sufficient to send King to the hotel that she was sent to.

The lawyer said that the document, to her mind, was incomplete.

The chief magistrate, however, said that the issue before the court was solely where King should be quarantined.

But the lawyer, however, said that while that was the case, the order by which the court was ordering that King quarantine in a hotel is “a flawed order”.

She said that the defence and the court had agreed on Tuesday that there were material omissions from that order.

Bacchus-Baptiste said that is why she wanted to ask Duncan some questions.

As the defence lawyer was saying that Duncan had told the court that King was communicated with, there was a break in the connection with her on the internet platform that was being used to conduct the virtual hearing.

During this time, Assistant Director of Public Prosecution Tammika Da Silva-McKenzie, who appeared for the Crown, told the court that if the order was an issue of contention, she wanted to draw the court’s attention to the section of the order that speaks to the order having been explained to King.

She said that King had refused to take an amended order that has the correct information ticked.

When Bacchus-Baptise re-joined the conversation, she was told that since the last hearing, King was served with amended documents, in the form of a follow-up order, in which there was a correction to what had been ticked initially.

The defence lawyer said that it was addressed retroactively and the chief magistrate said it was for this reason why the court had told the lawyer it was important to engage her client before the hearing.

King told the court that on Feb. 5 she had spoken to one Ms Simons and one Mr. Solomon.

“At no point did either of them tell me that there was a backlog,” the defendant said.

However, the chief magistrate said that the court was not dealing with the exemption but with the fact that she had received documentation.

But King said it was “not fair on me” having been served a document “about an hour ago.

“And I really should not have signed it. I should have had the benefit of an attorney when this thing was served on me. Everybody knows I have an attorney,” the accused woman said.

She said that a police officer and a nurse visited and it was the nurse who handed the document to her and that was “very strange”.

“Why am I having all this strange treatment?” she said.

The chief magistrate, however, said that bail was not an issue, but from the outset when the prosecution indicated that they had no objection to bail, the court was concerned about quarantine, in light of the protocols.

Bacchus-Baptiste, however, said that she was terribly perplexed, adding that when she spoke to the CMO, “She said to me that the application has been refused.

“I asked her why. She said to me she didn’t know the grounds for the refusal.”

The lawyer said she asked the CMO how she could deny the application and not know the grounds.

She said that the health official said the application for an exemption was not granted.

Bacchus-Baptiste said she told the CMO that she wanted to know on what grounds exemptions are granted so in the future she could know how to advise her clients.

“I said it cannot be done willy-nilly and it cannot be done surreptitiously. She said to me the grounds she uses for an exception are persons who suffer from dementia. I said, ‘That couldn’t be the only grounds. Can you please tell me what are the other grounds?’ and she could not do so.”

Bacchus-Baptise said that is why she wanted the CMO to attend the hearing, adding that it is important.

The chief magistrate said that it was important to the lawyer but the court would not be going into the CMO’s decision and that could be taken up elsewhere.

The lawyer said that hearing from the CMO was important in the event that the court rules that King must remain at the hotel and her legal team files for judicial review of that decision.

King’s bail was allowed to continue and the court ruled that she is to complete her quarantine at Casa Villa Apartments in Calliaqua unless health authorities grant her an exemption.

The matter continues on March 29.

10 replies on “Officials gave ‘opposite’ responses to exemption request — lawyer”