Gov’t ‘taking its piece from the people again’ 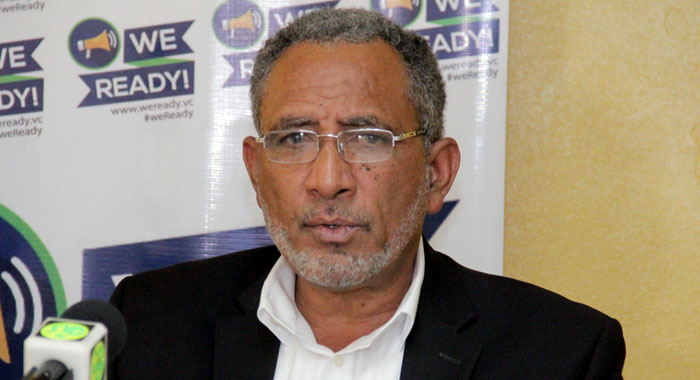 The one percentage point increase in the Customs Service Charge, approved in this year’s budget is a case of the government “taking its piece from the people again”.

Leader of the Opposition Godwin Friday further said the measure is, in effect a 20% increase in the tax, and will result in significant increases in prices to consumers.

Speaking on NICE Radio, on Monday, the opposition noted that the specific law is yet to be brought to parliament, and said that the people should say no to it.

He said that his New Democratic Party has put forward a plan that will grow and diversify the economy, and bring in capital to help us to invest in infrastructure and new businesses.

These initiatives will “generate future growth, while at the same time not creating more hardship on the people to develop,” Friday said.

The Unity Labour Party administration, on the other hand, “is just creating more hardship for people because all they are doing is just borrowing and taxing…

“What they do and what they have been doing is taxing people, getting the revenue from taxpayers and putting it into all kinds of things, including paying off the debt,” Friday said.

He said the increased customs service charge being the only thing in the budget “sounds like if it is a small thing, but it is not a small thing…

“So that’s a one percentage point increase but, effectively, a 20% increase in the customs surcharge. And that then goes on to adding to the value of the goods before the VAT is calculated so it is compounding because you are paying VAT on top of the additional surcharge.”

He said that this means that more money will come from the pockets of ordinary taxpayers.

Minister of Finance, Camillo Gonsalves said the measure is likely to generate EC$10 million this year, which will go to fund regional organisations.

“If they say $10 million, it would probably be closer to $12 million. So they’re taking that money out of taxpayers pocket right now when people are catching their tail just to make ends meet,” Friday said.

He said the revenue measure will affect everyone, because it would affect the price of goods.

“So all of these things now will figure in the goods that are on the shelf. Every little thing that comes through, this is why this is such a painful tax, because everybody pays it: rich and poor,” he said.

“But the truth of the matter is that the economist will tell you that those kinds of costs are just passed on to the consumer in the main, and then, therefore, all those costs are gonna go up … because of this increase in the customs surcharge,” Friday said and mentioned basic food and cleaning items.

“They are talking about $10 million — $10 million is not a little bit of money to take out of people’s pockets now. That’s how much they expect to collect each year.”

He said that while the price of items will not increase by 20%, they will increase and there will be an accumulative effect.

“So at the end of the day, when you have your basket full of goodies and groceries and you go to the counter to check out, it will be higher because of the surcharge and it must be higher because the government says that they intend to collect about $10 million. Where you think that come from? That comes from the money they collect at the port, which is then collected back from the final consumer by the merchant.”

Friday said that everybody, including the government, agrees that the people of St. Vincent and the Grenadines are feeling hardships as a result of the COVID-19 pandemic.

“But what about the rest of us?” the opposition leader said.

“Things are going to be harder for the rest of us and they have shown themselves in the budget they presented that they don’t care anymore as to how people are going to manage through the rest of this crisis because they have put nothing in it to help people through.”

Friday cited the recent development in which omnibuses were only offered a subsidy after withdrawing their services following the government’s decision to halve their permitted ridership because of COVID-19.

“What about all the people, the vendors, the hotel operators, the workers in those restaurants that are closed or half-closed? How are they going to manage?” the opposition leader said.

“You go on the streets of Kingstown and see how many vendors are making a living out there now. All of these, that’s how they make ends meet. So what it means is that more and more people in this country are not being able to make ends meet.

“And there are some people in government; they just seem to be doing better and better. The more closely connected and the higher you are, the better you are doing and government is taking its piece from the people again through this customs service charge,” Friday said.

“People must not let this pass. They have not brought the law yet to say they’re going to introduce it but the people of this country must say, ‘No, man. You can’t take money out of our pockets at this time.  We’re looking to you to put money in our pockets so that we can buy bread and send our children to school, to clothe them.’

“These are things that are necessary to help our people to make ends meet. And the government has put nothing in the budget for it.”