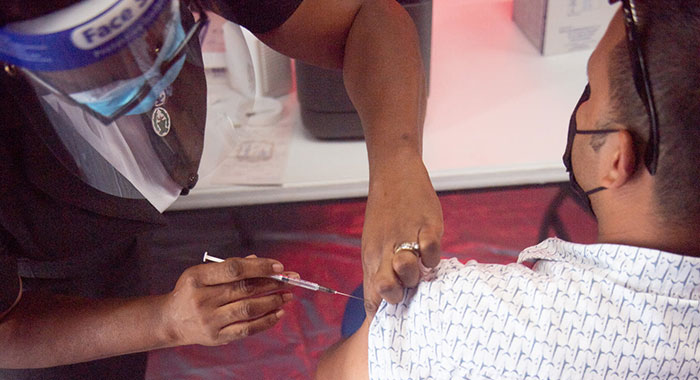 A COVID-19 vaccine is administered at Victoria Park in March. (Photo: SVG Health/Facebook)

The COVID-19 vaccination drive in St. Vincent and the Grenadines moved into high gear on Wednesday with 427 persons receiving vaccines at Victoria Park, in Kingstown.

“We are actually ramping up our vaccination drive,” Minister of Health St. Clair “Jimmy” Prince told iWitness News in a Facebook Live video.

He noted that the country received, on Monday, 40,000 doses of the Covishield (Indian) AstraZeneca from India and had, some weeks earlier, received 5,000 doses from Dominica.

“Vaccination is probably one of the most important public health interventions that you can make with respect to this pandemic,” Prince told iWitness News.

“And, inevitably, sooner or later, we will have to do it. We are doing it now and we want to make sure everybody gets it.”

He said that his ministry is hoping to vaccinate 50,000 persons in the next month or so.

“That is, if we are able to convince most of the people we want to convince to come forward and get it,” the minister said.

“Of course, there is some bad press for the vaccine, some anti-vaxxers, some hesitancy, reluctance on the part of people; they don’t want to take the vaccine and we are trying to get those people to come out and to get it.”

The health minister said that getting the vaccine is important because “it can save lives; it can prevent you from getting sick; prevent you from taking something home to your family, etcetera.”

He said that the vaccination drive would also be taken to the Chateaubelair area, Georgetown, Sandy Bay, and some of the smaller villages.

He said that his ministry already had an outreach programme from clinics across the country.

‘That alone we will not depend on; we will do our drives in the villages throughout St. Vincent and the Grenadines from Fancy to Ashton and this will continue for the next few weeks.”

The minister said that persons who are hesitant can still come forward in the future and get vaccinated.

“As long as we have the vaccines on hand, it will be open to them. Anybody can come and get it as long as we have it. So we intend to get more; so I am encouraging people to get it now,” Prince said.

He said he agrees with Prime Minister Ralph Gonsalves who said on radio on Sunday that the sooner people get vaccinated, the sooner the nation can return to some form of normalcy.

“But, remember, it is not just St. Vincent alone. The entire world had to be like that. We are doing our part,” Prince told iWitness News.

There are 684 active cases in the country and 954 persons have recovered from the illness.