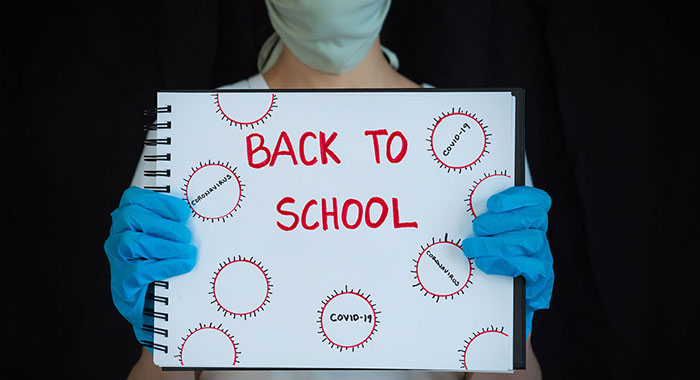 Alas, like nearly every other public policy issue in our country, political considerations have ruled the national response to COVID-19.

It has been known for months that healthy school-aged children, including pre-schoolers aged 3-5, college students aged 18-21, and everyone in between infrequently contract coronavirus in both absolute numbers and compared to older age-cohorts. As shown below, young people are even less likely to be hospitalised with or die from this virus.

This is because, unlike many diseases, including various strains of the annual flu which kill far more of our people of all ages every year than the mere eight Vincentians who have succumbed to this new virus over the past 12 months, COVID-19 is not an equal opportunity killer.

Again, most of these ailments are disproportionately found among the elderly of all countries including our own.

Conversely, all across the globe, almost all deaths among children from a variety of diseases and conditions, including contagious diseases, occur among those under the age of five.

Equally important, and linked to these medical pre-conditions, is that the chances of being infected, debilitated, and killed by COVID-19 gradually increases with age, as the following table compiled by the United States Centers for Disease Control and Prevention (CDC) shows.

Data from the United States is particularly instructive because it has the most comprehensive and reliable reporting system in the world, unlike some other countries that have deliberately low-balled their number of cases for political reasons.

There is no reason to suspect that this distribution would be significantly different in St. Vincent and the Grenadines (SVG).

More important still, direct data from SVG shows that our country has been almost untouched by COVID-19. Our eight virus deaths, none involving children, represent a trifling 0.0072% of our 111,000 population, a fact that we should all celebrate especially given our generally lackadaisical attitude to wearing masks and social distancing. Yes, COVID-19 is infectious but far less so than more devastating earlier viruses like the Spanish flu and smallpox.

It is now also well established that preventing children from engaging in face-to-face learning in a regular school setting has been devastating to them on many grounds. These include falling dangerously behind in their studies, being deprived of normal social contact, losing school lunch programmes, being subjected to depression, anxiety, physical and sexual abuse, committing suicide, becoming addicted to drugs or alcohol, and many more adversities. These are particularly pronounced, even in a rich country like the United States, among lower income and poorly educated groups whose family members cannot help them with their online studies, a cohort that makes up the majority of Vincentians in our economically and educationally challenged country.

According to Finance Minister Camillo Gonsalves our own students have been particularly damaged nutritionally because, “… over 7,400 primary school children depend on the [now unavailable] school feeding programme, 57% of the student body. In rural districts, over 90% of students use the programme.”

Many of these unintended consequences of trying to defeat COVID-19 will still be with us years after the virus is gone.

None of the established facts presented here seem to be known or of any concern to our educational elite or medical establishment as clearly shown by the comments by Oswald Robinson, president of the SVG Teachers Union

To his credit, Mr. Robinson has pointed out some of many limitations of remote internet learning but seems indifferent to the overarching problems of distance education as opposed to in-person classroom learning when he said that more computer tablets are the solution to school closures: “That’s why we have said that there are 90% of the primary school students who do not have a compatible device.”

He also seems disinterested in or ignorant of the fact that COVID-19 school closures and openings have been variable all across of the globe. Some countries or regions within countries have closed their schools while others have kept them open for reasons that do not appear to be linked to any well founded — read “medically established” — threat to the health or lives of their students.

Dr. Keizer-Beache, on the other hand, offers a simplistic one-size fits all approach to vaccination that totally disregards the fact that children lacking the comorbidities mentioned above should be sent to the back of the line when it comes to the distribution of the 40,000 doses of the Covishield (Indian) AstraZeneca vaccine which requires two injections.

We have long been told to “follow the science” when it comes to COVID-19. Unfortunately, in little SVG, as elsewhere in the world, we are doing no such thing.

One reply on “Follow the science and reopen SVG’s schools”