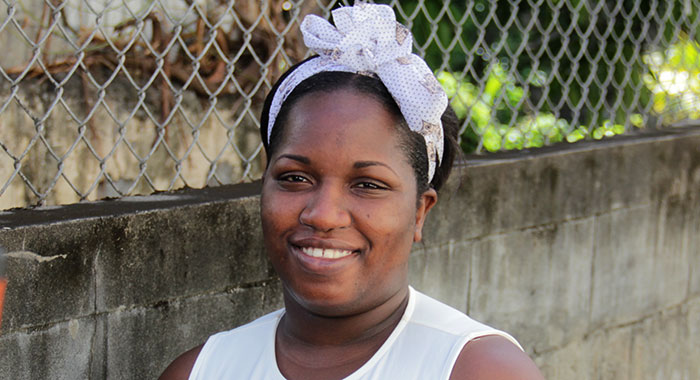 Eunice Dowers after being freed of the charges on Friday. (iWN photo)

The Nigerian-Vincentian woman who was being tried on 55 dishonesty charges related to the use of credit card and cheque books belonging to businessman Bertille “Silky” Da Silva, 90, walked out of the Serious Offences Court a free woman on Friday.

Eunice Dowers, 27, who is Vincentian by marriage, was charged with 55 counts of theft, fraud and money laundering, which she reportedly perpetrated while in Da Silva’s employ at Star Garage Ltd. from April 2018 to February 2019.

The Crown was alleging that Dowers unlawfully used up EC$100,000 of Star Garage’s money when she worked at Star Garage, first as Da Silva’s secretary and then as the company’s Customs broker.

However, on Friday, at the Serious Offences Court, Chief Magistrate Rechanne Browne ruled that the Crown had not made out a case for Dowers to answer on any of the 17 counts of theft, 14 counts of taking possession of Da Silva’s credit card, 14 counts of fraud, and 10 counts of money laundering.

A magistrate could impose on a person convicted of taking a card without consent, a fine of up to EC$30,000 or two years imprisonment or both.

The prosecution’s case, presented by Crown Counsel Rose-Ann Richardson, was that Dowers had retained the information of a credit card belonging to Da Silva and had used it without his permission.

The prosecution further alleged that Dowers used Star Garage cheques to pay Customs charges for her personal items as well as those that the company had imported.

Star Garage would give Dowers, its customs broker, blank cheques made out to the ‘Accountant General’ when she was going to the airport to clear items with Customs.

But defence counsel Grant Connell, through his cross examination, had made out a case that Dowers and Da Silva, a director at Star Garage, were in a sexual relationship and, as a result, he had given her access to the company’s financial instruments.

Da Silva vehemently denied this, although he admitted that he and Dowers would go for drives in his car on Sunday afternoon and that she had visited and cooked at his house on a number of occasions.

The chief magistrate upheld a no case submission that Connell made on Feb. 18.

Connell had argued that some of the charges appeared to read contrary to the Electronic Funds Transfer Act 2014, under which they were brought.

Connell argued that these defects in the charges could not be remedied at that stage and urged the court to rule that his client had no case to answer.

But, the prosecution countered that the Crown had made out its case against Dowers.

Richardson admitted that the charges did not cite the specific subsection of the law, but noted that they alleged that Dowers did take, without consent, a card from Da Silva’s possession.
She noted that evidence in the case, as adduced from Marva Hannaway, a client services officer at CIBC First Caribbean International Bank (FCIB), was that Star Garage’s was a corporate account that named card holders, which included Da Silva.

In presenting her ruling, the chief magistrate noted that Dowers had been charged that between Sept. 4 2018 and Jan 31, 2019, at Kingstown, with intent to defraud FCIB, she obtained service by representing the consent of Bertille Da Silva of Indian Bay that she is the holder of a credit card issued to Da Saliva.

The act further says that a cardholder means the person named on the face of a card to whom or for whose benefit a card is issued.

The chief magistrate pointed out that the card in question is a credit card and during the presentation of the prosecution’s case, exhibits were tendered, including bank statements, credit card statements, cheque books and customs documents.

She observed that the credit card statement and the chequebooks were for the corporate accounts of Star Garage and noted that Da Silva is a director of Star Garage.

Dowers was also charged with theft, namely that on various dates between Sept. 4, 2018 to Jan. 31, she stole various amounts of cash, Da Silva’s property.

She was further charged that between those same dates, at Kingstown, she converted criminal property of various sums in US and EC currency, which were unlawfully withdrawn from Da Silva’s credit card to purchase a quantity of articles which she knew or suspected, in whole or in part, directly or indirectly represented the proceeds of criminal property.

Browne noted that credit card statements were produced for September 2018 to February 2019 and that the evidence before the court was that Joshua Da Silva – Da Silva’s nephew and general manager of Star Garage — ticked the transactions that were authorised.

Browne pointed out that the charges related to a bank account and the removal of funds from that account.

The prosecution’s case was that the funds were removed from the account without authorisation and the defence countered this, Browne said.

She noted that Dowers was charged with taking a card from the possession of Da Silva.

She noted that the charges that were brought under the Proceeds of Crimes Act speak to various sums and conversion of criminal property from Da Silva’s chequebook or credit card.

Browne, however, noted that no chequebook belonging to Da Silva was represented to the court and that the chequebooks that were tendered into evidence belonged to Star Garage.

The chief magistrate ruled that, as such, Dowers would have no case to answer in relation to those offences.

With regard to the theft offences, while the allegation was that Dowers had stolen various sums of cash, Da Silva’s property, again the credit card statement and the chequebooks presented to the court relate to Star Garage Ltd. and not Da Silva.

The court, therefore, ruled that Dowers had no case to answer in relation to those charges.

The chief magistrate’s ruling ended the trial, which began in January 2020 was initially intended to last three days.