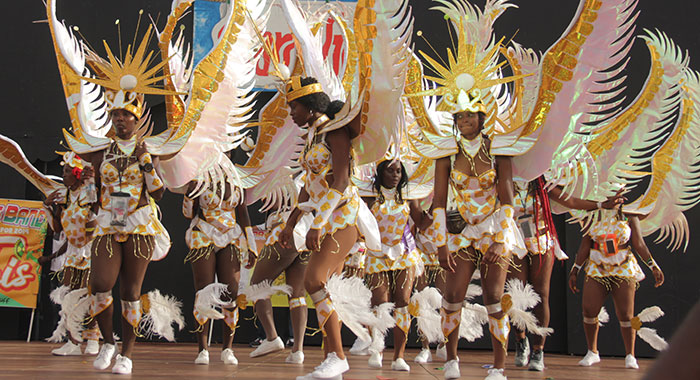 St. Vincent and the Grenadines will only have its annual carnival this year if 70 to 80% of the adult population is vaccinated against COVID-19 by May.

Vincy Mas, the nation’s largest cultural festival, runs from June to July and was cancelled last year because of the coronavirus pandemic.

The government is yet to say whether the festival will be held this year.

“There are cultural people who come to me and ask me, ‘Comrade Ralph, are we going to have carnival?’. I say, we will have carnival in July if as we come up to the month of May that I see that we have reached a level where we can say that we have 70, 80% of the above 18 population, and maybe it may go down to 16,” Prime Minister Ralph Gonsalves said on Sunday.

He told the National Heroes Day wreath laying ceremony that the circumstances are different this year.

“We didn’t have the vaccine last year around carnival,” he said.

Gonsalves has been appealing to Vincentians to get vaccinated amidst low uptake and significant hesitancy.

In Sunday’s speech, he invoked the name of national hero Joseph Chatoyer in his bid to sway the nation towards vaccination.

“… Chatoyer would have supported fully the education of our children,” he said.

Schools in SVG have not reopened for the year. And, after the pandemic was declared in March 2020, students have only returned to the classroom for the September to December term.

Classes are being held online as a result of the pandemic.

“Our children are suffering because of not being able to go to school. And we are seeing a greater divide in the educational system between those where their families are encouraging them to be online and have all the facilities and those who are not,” the prime minister said.

“We are not going to get back to normalcy unless we have ourselves vaccinated. The science tells us so. And for those who say there are risks, the risk of not taking it, I say to those, far outweigh the taking of the vaccine.”

SVG has received about 45,000 doses of vaccine, including 40,000 doses of the Covishield (Indian) AstraZeneca from India and is hoping to put them into the arms of about 20,000 people over the next few weeks.

Gonsalves said that some persons were waiting in the hope of taking a particular COVID-19 vaccine.

“I say the best vaccine for you for COVID is the one that is available,” he said, adding that the development of a vaccine for COVID “didn’t just start last year”.

“It is in the spirit of Chatoyer, in good sense and solidarity and discipline that I am urging and relying on science that you take the vaccine.”

In February, after “prayerful consideration” Gonsalves took one of 20 doses of Sputnik-V that his government had received from Russia through “an intermediary”.

“I am not just telling you that I took it and it is a personal decision, you can take it if you want. No. I’m going further than that. I took it and I’m urging you to take it.

The prime minister said that vaccines are scarce the world over, except for rich countries.

“And we have it here and there are some persons don’t want to take it. They’re waiting.  Waiting for what? In the long run, we are all dead.

“I’m told one of the main reasons we are not taking it, there is not the urgency for us because we haven’t been in lockdown, we haven’t had the number of deaths; we have been able to hold things pretty much in good order so that there is no fear. Well, rational people do not act simply because of fear.  You act because it is the proper thing to do; it is the right thing to do,” Gonsalves said.