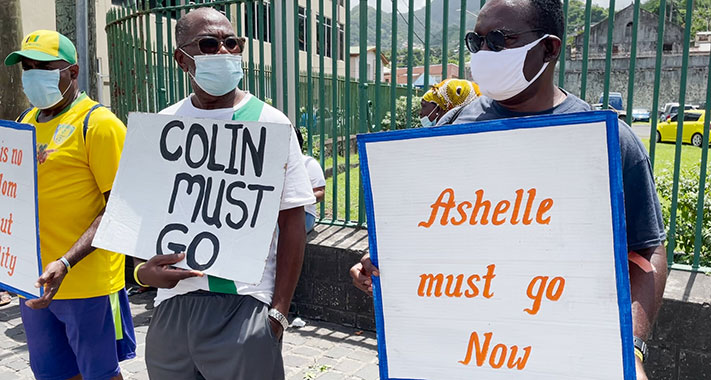 Central Kingstown MP, St. Clair Leacock, an opposition lawmaker, is calling for the resignation of Commissioner of Police, Colin John.

“The reasons for Colin John to go are quite a bit,” Leacock said, adding that they begin with the police chief’s handling of the shooting of Diamond resident Cornelius John, 60, in which assistant Director of Public Prosecution, Karim Nelson, and Deputy Speaker of the House of Assembly, Ashelle Morgan have been implicated.

“…  that is a very serious issue. Serious on many fronts as has been explained to you before,” Leacock told iWitness News on Wednesday, while standing among protesters outside the High Court and Parliament building in Kingstown.

He said he does not know that it has taken as many as 10 weeks to investigate “a basic report of a shooting”, adding that it seems that “rather than the report being taken seriously and people being arrested, we have what appears to us an attempt to turn things around. That is, you want to press and bring charges against Mr. John.”

The opposition lawmaker said it is amazing that the prime minister has acknowledged that there were three people allegedly involved in the incident but the nation has to wait more than 10 weeks to know who is the third party.

Leacock said that another reason why the police chief should quit is the alleged involvement of a police officer in the removal of weapons and ammunition from the armoury at the Georgetown Police Station.

Zackrie Latham had been a police officer for just over a year when he was fired on Sunday, one day after he was charged with a string of offences relating to the alleged theft of at least two Glock 22 pistols, one M-4 rifle and hundreds or rounds of ammunition from the armoury at the Georgetown Police Station.

Leacock, who attained the rank of major in the St. Vincent and the Grenadines Cadet Force, said he used to be in charge of an armoury when he was in the Cadets and he also has some knowledge of the situation with the police force.

“So how does an ordinary constable manipulate a system to get authorisation and access to an armoury? How do you explain that? And then at a time when so many gun crimes are there in St. Vincent and the Grenadines.  Purportedly, you have the police guns being on the street for sale, ammunition from the police armoury being on the streets for sale. That is a ridiculous danger.”

Leacock said the police handling of the shooting case should be contrasted with the ease with which other people are rightfully brought before the court for other offences.

The lawmaker was standing among protesters who, as his New Democratic Party has done, have called for Morgan to demit office pending the outcome of the police investigation. Nelson has gone on vacation leave since the shooting.

He said he knows little about Morgan and has no personal interest in her.

“But it is symbolic of where we are going in St. Vincent and the Grenadines at this time: downhill with democratic practices, downhill with respect for the constitution and abuse of office.”

Leacock said that he could not guarantee that the things he complained of would change if the police chief resigns.

“Because, certainly for the last 20 years, save and except, perhaps for Hadaway, we have more of the same. I have never in my living history had a commissioner of police dressing in the party colours of the party, attending political meetings in a campaign, being on the front page of newspapers, indicating the signs of the governing regime and five in a row; have policemen recruited the day before an election into the police force, have policemen in auxiliary uniforms registering at the polling station to participate in the election process, having one who is commandant of the auxiliary police force being a declared person in charge of the campaign against me, the representative for Central Kingstown,” the Central Kingstown MP said.

“I am speaking evidentially. It is sad. And we have to have trust and confidence. But you know what it is? It is that all across St. Vincent, when we look at it, all the people who are put in certain officers are gatekeepers of the governing regime. And it is so easy to get our professional people, whatever title, whatever position that they hold, to genuflect to whatever the regime wants and that is why St. Vincent is in such a sad state.

“That’s why people cannot be out here on the streets. And that I have to applaud people like the President of the Teachers Union who is here, maybe privately, maybe in his official position,” he said of Oswald Robinson, who was also on the picket line.

He also commended Elroy Boucher, president of the Public Service Union and the head of the women’s movement, Beverly Richards.

“Because they are standing up to be counted,” Leacock said.

“I want to make it abundantly clear, Vincentians have a right to protest, whether it is one or whether it is plenty and this resistance to protest, when the very regime that is in office boasts day in and day out that they came to office by way of roadblock revolution, by cutting short the constitutional life of a government and they want to employ the most draconian means to make sure that no other side can do that.”

6 replies on “MP calls on police chief to resign”