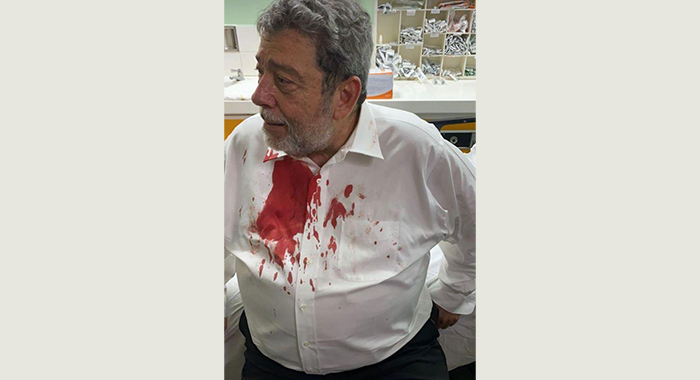 Gonsalves was struck by an object allegedly thrown by protesters as he emerged from his official vehicle and was walking towards the Parliament building.

Hundreds of protesters had gathered in the streets of the city protesting proposed changes to the Public Health Act, which could force some workers out of their jobs if they choose not to vaccinate.

Minister of Finance Camillo Gonsalves, who is also his son, told legislators that his father was left “bleeding” as a result of the incident, and condemned the act against the prime minister.

The finance minister further decried opposition lawmakers for not condemning the violence against the prime minister.

Opposition Leader Godwin Friday was not in the assembly chamber at the time of the minister’s comments.

As a result of the injury to the prime minister,, there has been a stronger police presence near the Parliament building, to which a large contingent of officers from

various units had been dispatched earlier on Thursday as a result of the protest.

In the campaign for the November 2020 general elections, the prime minister declared himself “World Boss”, having led the country to a non-permanent seat on the United Nations Security Council.

Hundreds of supporters of the main opposition New Democratic Party (NDP) as well as two public sector unions turned up to protests the legislation that the government said would allow for the vaccination of public sector workers, considered to be front line workers.

The government is proposing to remove the word “voluntary” from a section of the law that speaks to vaccination against an illness that has triggered the declaration of a public health emergency — as is the case with the coronavirus (COVID-19) pandemic.

3 replies on “PM Gonsalves injured during protest in Kingstown”