New charge against PM wounding accused to be heard Sept. 15 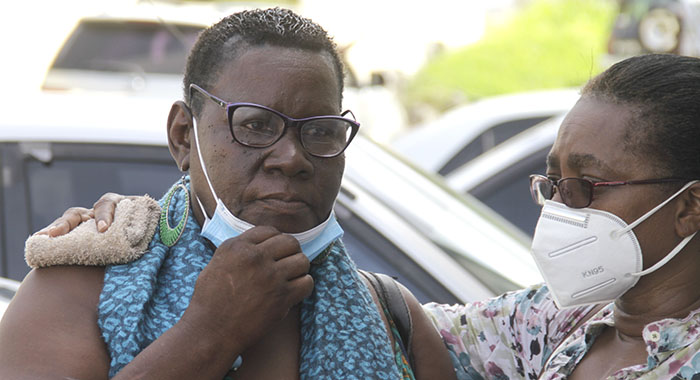 The accused, Annamay Lewis, left, and former diplomat Doris Charles, outside the Kingstown Magistrate’s Court, after the arraignment, on Monday. (iWN photo)

The new charge against Annamay Lewis, the woman accused of wounding Prime Minister Ralph Gonsalves, will be heard on Sept. 15, the same day as the wounding trial.

On Wednesday, Lewis, a 56-year-old vendor, of Layou, appeared before the Kingstown Magistrate’s Court, where she pleaded not guilty to a charge that on Aug. 5, at Kingstown, in a public place, to wit White Chapel Road, she threw missiles to the danger of persons who were present.

The lawyer told the court that the new charge arose out of the same incident that resulted in the wounding charge against her client.

She noted that trial in the wounding matter is slated for Sept. 15 and asked that the hearing of the new charge be set for that date also.

Bacchus-Baptiste told the court that she was yet to receive disclosure in the wounding matter — which the court had ordered be done by Aug. 31.

Burnett, however, indicated that that matter comes before the court on Sept. 15 — an indication that he could not pronounce on a matter that was not being adjudicated at the material time.

Bacchus-Baptiste asked for disclosure in two days, saying that she did not see the problem with the Crown complying, as it has been over a month since the incident occurred.

The court ordered that disclosure take place by Sept. 13.

Lewis is charged with wounding Gonsalves, who suffered an injury to the head when he was struck by an object allegedly thrown by a demonstrator as he walked through a protest near Parliament, in Kingstown, on Aug. 5.

One reply on “New charge against PM wounding accused to be heard Sept. 15”