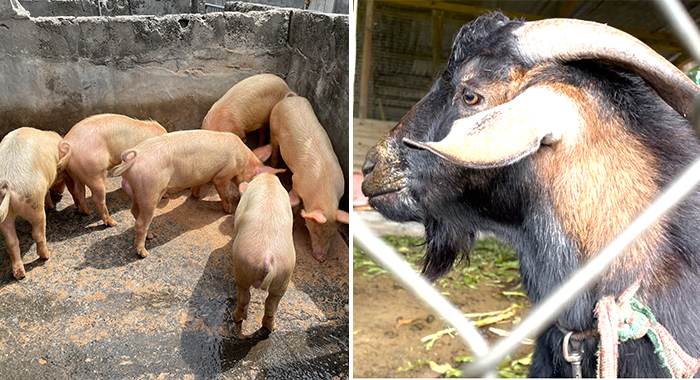 Many people are deterred from agriculture because of the theft of animals and produce. (iWN photos)

Agriculture in St. Vincent and the Grenadines “won’t recover” until the relevant authorities address the theft of farm produce and animals: predial larceny.

This is the view of Leader of the Opposition Godwin Friday, who noted that in the campaign for the November 2020 general election, his New Democratic Party outlined a no-nonsense approach to the issue.

The opposition leader was commenting, on Monday, on his weekly appearance on New Times, his party’s daytime radio programme on NICE Radio. He was responding to an iWitness News report about the theft of cattle in Langley Park recently.

In one case, a heavily pregnant cattle was slaughtered and the unborn calf discarded as the thieves left with the carcass.

“We said that we had a zero tolerance approach to predial larceny … so that we don’t have a situation where the farmers are planting and somebody else is reaping for them,” Friday said.

He said that in such a situation, not only do farmers not get a return on their investment but it also discourages further involvement in agriculture.

Friday said that the report about the theft of cattle touched “very close to what we were talking about.

“I mean a cattle is a fairly extreme case,” he said, adding that usually people will steal small ruminants.

“But when you are going that far it means that these people who are doing this … are emboldened; they are brazen; they feel that they could do it with impunity and that is not acceptable because listening to that story, you understand how damaging it is, not  just for that family.”

He said the Langley Park farmers have suffered loss through the theft of their cattle, but also noted the challenges that Zerah Sutherland, one of the farmers, noted that he had faced in his attempts to expand into milk production and raising a particular breed of cattle.

“There are other problems with which the Ministry [of Agriculture], apparently from their accounts, the way in which the government did not provide assistance but in terms of predial larceny … that is so destructive to production in the agricultural sector in this country. It is not given sufficient attention.”

Friday spoke of the importance of enforcing the existing predial larceny legislation.

“If there is no detection and no accountability, no punishment, that people don’t feel that they are going to be caught, then the situation, no matter what you have on the books, those who are stealing people’s animals, they would continue to do so and that is what is happening now.”

He said that the effects of predial larceny on agriculture is well known, adding that people question the benefit of going into agriculture.

“What am I going to plant for, except I can see it around my home? But to put it somewhere where it is out of sight, they feel you have to hire a security guard to look at that. By then, you are working for the security guard,” the opposition leader said.

“So that is something that needs to have urgent attention. Agriculture will not recover, will not; farmers will not feel comfortable, confident to plant or to raise their animals if they know that somebody going come and take it at the right time when it should be them harvesting or take their animals, even to the extent of taking the calf from an animal,” Friday said.

He said there must be a public outcry against predial larceny. “… if somebody comes to you with meat to sell and they are selling you at a price that you know that they could not have done that if they raised that animal themselves, why you buying that for?” Friday said.

“Because you can make an extra dollar? In a sense, all we are doing there is contributing to the demise of the agricultural sector and that is something that I feel is not given sufficient attention.”

He said that the NDP has proposed a zero tolerance approach to predial larceny.

“That is, you catch somebody, they will be punished. And it doesn’t matter how serious is what you have on the books, [how serious] the penalties are. If you don’t have the people out in the field doing the detection, when somebody calls you, you have to be there.

“You don’t say I don’t have any transportation. I’ll come see you in the morning, or I’ll come and see you tomorrow or when I get transportation, I’ll come and see you. By then, the crime has been committed, the tracks have been covered and finding the people to hold them accountable becomes a lot more difficult, if possible, at all.  So that is something that we definitely have to address and agriculture won’t recover unless we address it effectively,” the opposition leader said.