‘Mental issues’ among teachers who took jab against their will — union 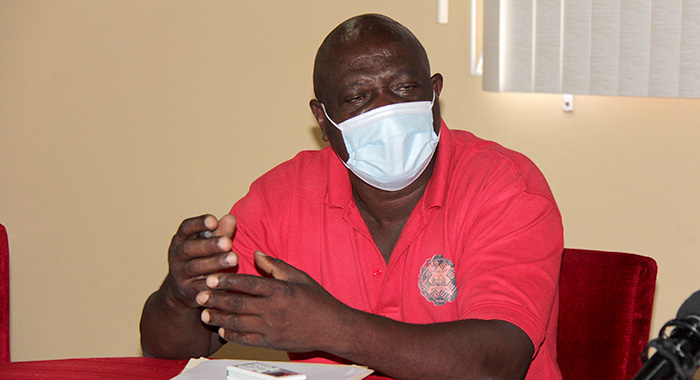 A number of teachers who took the COVID-19 vaccine at the last minute, against their will, have reported to their union that they are experiencing “mental issues” as a result.

“They did not want to, but because of their jobs, they took it. And so we are seeing persons reporting a number of mental issues, a number of stress-related issues coming out of this,” Andrew John, industrial relations and research officer (IRRO) at the St. Vincent and the Grenadines Teachers’ Union told the media on Wednesday.

“… you want us to go into the classroom in this kind of mental state — where I am not happy with the decision, I am worried about my health, … I am not feeling comfortable with what I have done, with the decision I have made,” John further said. “And you’re expecting that we will go back and do our best in the classroom.”

John said he was “moved to tears” on Tuesday on hearing the plight of an unvaccinated teacher who is at risk of losing his job because of the government’s COVID-19 vaccination mandate.

The union called a press conference, on Wednesday, promising “an interview/testimonial session … with some teachers … to talk about their experiences as a result of this vaccination mandate”.

However, none of those teachers attended the event, which John said was “intended to share the views of our members who are going to what we will call very, very horrid, very difficult experiences.

“And so far, we have documented a number of issues. Some of them (teachers) were supposed to be here. I think because of reasons which some persons may not want to [disclose] — we don’t have them with us today, which is sort of unfortunate.”

Teachers had until last Friday, Dec. 3, to take a COVID-19 jab or secure a medical or religious exemption or be deemed to have abandoned their jobs.

On Wednesday, Prime Minister Ralph Gonsalves said on radio that around 320 of the nation’s 2,000 teachers  had not submitted proof of COVID-19 vaccination. Of that number, about 200 were waiting word on their applications for exemptions.

Unvaccinated teachers are being barred from the school compounds, and those who attend classes are deemed to be absent and guilty of misconduct.

He said that the educator who came to him on Tuesday “has his mortgage, he has children.

“And yet, because of his religious beliefs, he does not believe that he should take this vaccine. And so he is threatened, his wife [, a public servant,] and himself with losing their jobs.

“Now, they have children, they have their mortgage to pay, But yet, in the height of Christmas season, which is supposed to be a blessed yuletide season, we are hearing government saying that the teachers who are unvaccinated will see empty bank cheques at the end of the month; they will not be paid.”

He said that the teacher spoke of “the stress that this has brought him, even in light of his bishop refusing to sign his exemption”.

The application form for an exemption on religious grounds requires the signature of the leader of the religious group to which the applicant belongs.

Some Christian denominations have said that they will not support applications for exemptions from the COVID-19 vaccine on religious ground, because it is not part of their doctrine.

“Teachers who have sought exemptions both on medical and religious grounds and they are routinely denied — routinely,” John said.

“It doesn’t make any sense you bring your medical record from your previous doctors, the cards are stacked against teachers. There is like a no-win situation for teachers.”

John said that the Teachers’ Union  seems to be “the only light at the end of the tunnel”.

“This is the hope that the teachers have right now, a lot of them are praying and they are appealing. But even the bishops and the churches are saying they don’t have this as a doctrine.

“This is a bread and butter issue and yet they’re saying [they don’t have this as a doctrine.]  And even in cases where some pastors have signed, … the exemption has not been granted. We are teachers who have come with issues that they related. These are issues that have been documented by their doctors over a period of time.”

John said that teachers have complained about a number of issues after taking the vaccine.

John speculated that he could count on one hand the number of medical exemptions that had been granted to teachers.

John noted that the government had listed a number of doctors who could grant a medical exemption. And even if those doctors conclude that a person should receive a medical exemption, the chief medical officer could have their recommendation reviewed.

“… no matter who you’re visiting before, you have to go to these 10 doctors , I can’t say what their mandate is,” John said in relation to the government-approved physicians.

“But we, from our experience, … they are not granting any exemptions. You go for a religious thing, it has to go to Cabinet. It must go to Cabinet before it can be approved. So even if you have the requirements that they stipulate — you must fill the form, you must get your pastor to sign — still has to go to Cabinet. So we are seeing that our teachers are between a rock and a hard place.

John, however, noted that the rules said that the religious exemption must be in a form approved by the Cabinet. He called on the government to clarify this.

John told the press conference that on Tuesday another educator reported to him that they had gone to the bank for refinancing, but the bank asked for a job letter or vaccination card.

“Now that is another stumbling block that is put in the way of teachers. Because what that is saying is that the bank has already realised that if you are unvaccinated, then you don’t have a job.

Regarding the prime minister’s comments that unvaccinated teachers will not be paid in December, John said he could not feel happy having his Christmas meal with his family “knowing that there are parents out there, teachers and other public workers, public servants who will not be able to provide a meal for their family during this Christmas season — for their children.

“This is wider than just the Teachers’ Union. It is across the nation,” he said.