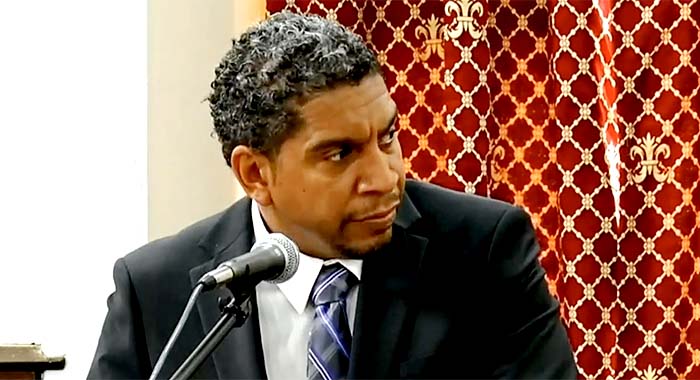 Minister of Finance, Camillo Gonsalves presents the Estimates in Parliament on Monday, Dec. 13, 2021. He is now scheduled to present the Budget next on Jan. 10, 2022. (Photo: NBC Radio/Facebook LIVE)

The government will create 144 new job posts in the 2022 Budget.

The jobs are being created after a year in which a number of public sector workers have quit or been fired over the COVID-19 vaccine mandate and as a significant number of nurses have resigned to take up jobs in the United Kingdom.

Minister of Finance Camillo Gonsalves announced the 144 new posts  on Tuesday, as he presented for parliamentary approval Estimates of Revenue and Expenditure for 2022, amounting to EC$1.32 billion — a 9.6% increase over the approved budget for 2021.

He said that 18 posts have been created under the Ministry of Finance, Economic Planning and Information Technology.

Of these, 10 were added to the Information Technology Services Division (ITSD) to strengthen the e-government unit, network systems and services support unit and the maintenance unit in order to build internal capacity to adequately deliver and maintain ICT services.

The finance minister said that the government wants to leverage what its hopes to be a major programme of digital transformation across government services and the way in which the citizens interact with the state and a variety of endeavours.

He said that with the formal World Bank-funded portion of the concept project concluded, “the ITSD needs this additional staff complement if it is to provide efficient and effective delivery of e-government services, including intranet, email, web services, and the type of one-stop e-government portal that we’re hoping to develop over the course of 2022 and beyond”.

Of the other eight positions in the Ministry of Finance, Economic Planning and Information Technology, six are under economic planning to support a Coastal and River Protection Unit, which is to be introduced next year.

The posts are made up of a coastal engineer, a quantity surveyor, two civil  technicians, and a clerk/typist.

The other two posts have been placed under the Customs and Excise Department to strengthen the petroleum and inventory audit unit and the bulk inspection unit.

The Ministry of Health and the Environment will get 61 posts, including 22 positions that have been added to the staff of the Argyle isolation centre “in an effort to further support the service provided at this facility in light of the continuing challenges of the COVID 19 pandemic in St. Vincent and the Grenadines”.

The finance minister said that the added staff includes a ward manager, 12 staff nurses, six nursing assistants, and three nursing auxiliaries and these will be used to support acute care as a direct response to those persons whose condition necessitates a stay at the Argyle isolation centre.

The other 37 posts have been created under Geriatric Care Services as a result of the significant expansion in that programme.

Geriatric services will be expanded with the addition of a facility at Orange Hill, Gonsalves told Parliament.

Two dental assistants have also been added to dental services under the Community Health Service.

In the nursing service at the Ministry of Health, 28 people had not taken a COVID-19 vaccine as of Dec. 3, the end of a 10-day grace period under the law that came into effect on Nov. 19. They are, therefore, deemed to have abandoned their jobs.

The minister said that 28positions have been created within the Ministry of National Security.

Of these, 19 have been added to police services in the form of recruits, bringing the total for 2022 to 100.

The government has said that 32 police officer quit before its COVID-19 mandate for “frontline” workers came into effect on Nov. 19, and officer 13 refused to take the jab, resulting in their termination.

The finance minister told Parliament that the Coast Guard Service will see the addition of five posts to enhance their ability to patrol the nation’s waters.

He further said that the Coast Guard intends to relocate its medevac vessel to the sub-base in Canouan, to provide more rapid medical services there.

This, however,  necessitated an increase in the crew complement and the staffing of the Coast Guard, Gonsalves said.

The National Emergency Management Organisation (NEMO) has been credited with three more positions to further enhance their human resource capabilities.

This as NEMO seeks “to coordinate the use of available resources to ensure that Vincentians are better able to prepare and respond to and recover from the impacts of natural disasters as we’re still doing”.

The finance minister said there would be ample opportunity to discuss this during the debate on the budget, beginning on Jan. 3, 2022.

The Ministry of Tourism has been allocated two posts under Aviation Services, mainly to assist in raising the levels of efficiency and effectiveness in the management of its technical operations, and to deal with what is anticipated to be increased air traffic in 2022.

The Ministry of Urban Development has been allocated one civil technician post to assist with project execution.

Three posts have been created within the Ministry of the Public Sector to strengthen the Public Sector Reform Unit as it seeks to deliver efficient and effective government service to all citizens in St. Vincent and the Grenadines.

Eight posts have been added to the Ministry of Transport, Works, Land and Physical Planning. This includes two engineers that have been added under Project Management Services to enhance implementation capacity.

The Ministry of Agriculture has been allocated two posts — a senior agriculture instructor and a senior projects officer — both under the policy planning and administration arm of the ministry.

In the Ministry of National Mobilisation, Social Development, Family, Gender Affairs, Housing, etc., four positions have been established under social protection, namely one caseworker and one social worker.

One child protection officer will be hired as well as a  senior executive officer under Policy Development and Administration.

One post of parliamentary counsel 3 has been added to the Ministry of Legal Affairs and one Crown Counsel to the Office of the Director of Public Prosecutions.