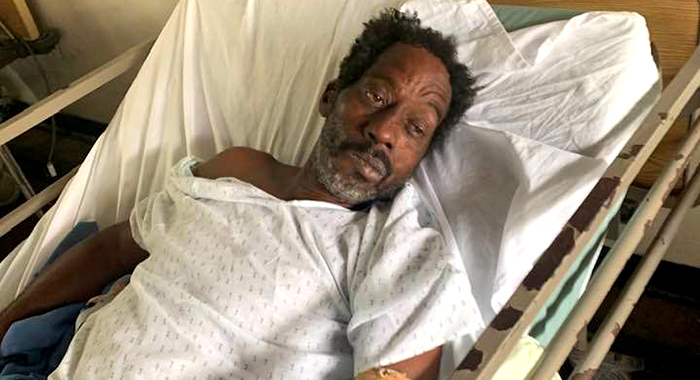 One of the three people injured on Dec. 2, 2021 during unprovoked attacks in Kingstown by a man said to be mentally ill, died on Wednesday, a month after the attack.

Lance Wilson, one of two people left unresponsive after the man struck them in the heads,  died at the Milton Cato Memorial Hospital, his friend, Fitzgerald Bramble, who is also MP for East Kingstown, said in a Facebook post.

Wilson had regained consciousness after the incident and had been recovering on the male surgical ward of the hospital, Bramble had said in a Dec. 8 update.

“He is moving , and has all his faculties about him and is also talking and comprehending,” the MP said then.

However, in his post after Wilson died, Bramble, an opposition lawmaker, said:

“Maybe he would have had a better chance of surviving if he was able to fly out to Barbados for an MRI . I am soooo outraged right now. The perpetrator of this crime should either be in the Mental facility or in jail!!!!” Bramble said.

He said that the attacker “murdered my friend”

“Where is the family of this criminal? What are the authorities doing about this? Is the man who committed this crime still walking the streets of Kingstown? If so, who will be his next victim?

“This is total bulls**t!!! Would this have happened if Lance was a big shot in society? Someone please provide some answers. RIP bro.”

Bramble’s reference to MRI might cause some Vincentians to remember that Prime Minister Ralph Gonsalves was flown to Barbados after being struck in the head with an unknown object while walking among protesters in Kingstown on Aug. 5.

The prime minister is said to have suffered a superficial wound and a concussion.

He was to have gone back to Barbados for a follow-up MRI four to six weeks after, but, from all indications, he did not make the trip.

Wilson was not afforded such medical attention although he and another victim of the attack were unresponsive for more than a day after being injured.

Meanwhile, on Dec. 3, police said they had  launched an investigation into the attacks.

The Police Public Relations Department said that the three people were injured by Cornelius Kennedy, of Lowmans Leeward, “who is believed to be mentally ill”.

Police had said that Kennedy would be taken to the Mental Health Centre for a psychiatric evaluation.

They have provided no update since then.