Chinese man who lived on streets of Kingstown returns home 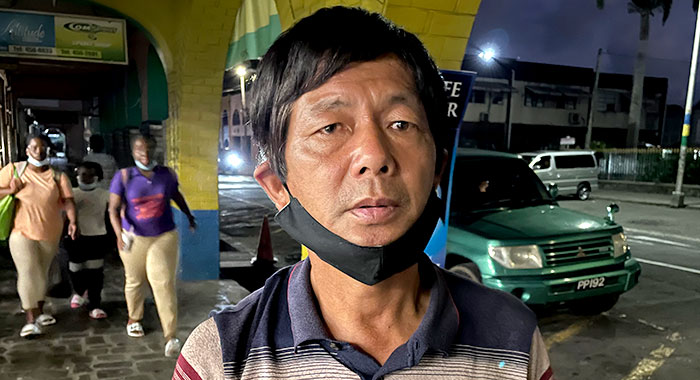 Yu Lai-bao, 54, the Chinese man who lived on the streets of Kingstown for weeks after his Chinese boss who brought him from their home country threw him out, returned home on Friday.

Yu told iWitness News on Thursday that he was scheduled to leave St. Vincent the following day.

He was expected to spend three days at the Chinese embassy in Bridgetown before travelling, on Monday, to Holland, and fly to China from there.

“He has left. He is now in Barbados,” the younger Yu told iWitness News, in Chinese, via text message.

And even as Yu was preparing to leave St. Vincent, he expressed concerns that his former bosses would withdraw from his wife’s and son’s pay the cost of his ticket home.

iWitness News understands that Yu’s wife and son could expect to leave St. Vincent soon as immigration officials have not renewed their work permits.

He and his family were brought to St. Vincent because of having incurred debts in China. The deal was that they would work with their Chinese bosses for two years, after which the bosses would buy them return tickets home.

As part of the arrangement, the employers paid for visa, work permits and other government documents in SVG as well as provided housing, food and transportation in the country.

If either of them wanted to go back to China before the end of two years, they would have to buy their own ticket.

Further, Yu and his family were paid at the end of each year. Their pay, however, was not given to them, but was sent back to China to their debtor, after their bosses had withdrawn the total amount that they had “borrowed” from their bosses throughout the year.

However, the relationship between Yu and his bosses began to deteriorate after he stole some EC$20,000 from them in August 2020.

Then, on June 18, 2021, Yu said he overhead his bosses saying that they are going to send him back to China and that he would have to pay for his ticket.

He said he accused his bosses of not living up to their arrangement and a fight ensued, during which he was beaten then thrown out onto the street.

A video of the fight was widely circulated on social media at the time.

After living on the street for several weeks, during which Yu abused alcohol, threatened to kill himself and was assaulted from time to time, immigration officials gave his bosses an ultimatum and they rented an apartment for him.