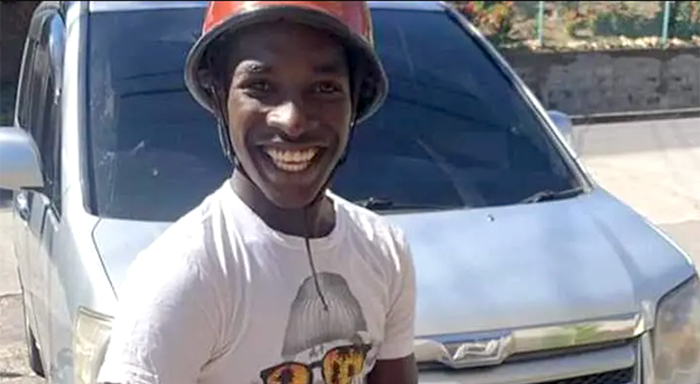 The 18-year-old motorcyclist  who told his mother that his paralysing injuries were sustained last Wednesday when a police vehicle ran him over while pursuing him on his motorcycle, died in hospital today (Sunday).

Cjea Weekes, of Argyle, died two days after doctors told his mother, Natasha Weekes that he was paralysed from the chest down and also had a broken spine and left leg.

The mother told iWitness News on Friday that her son had told her that police had pursued him in their vehicle after he and a friend failed to comply with their instructions to stop.

Weekes and another friend, identified as “Dusty”, reportedly failed to stop because they did not have their learner’s permit on them, as required by law, although they had a letter “L” affixed to their motorcycles as the law also demands.

Weekes told iWitness News that her son was run over along a dirt road in Vermont.

However, additional information reaching iWitness News suggests that the incident occurred in Twenty Hill, a community between Rillan Hill and Penniston.

On Friday, Commissioner of Police Colin John told iWitness News that the report reaching him was that the youth was injured when he fell, shortly after he ignored a police signal to stop while riding a motorcycle dangerously.

“I don’t know about being chased. The information I received from the police is that he was riding the motorcycle in a dangerous manner, the police came out of the vehicle, they gave him the number one stop signal, he refused to stop. He drove past. Based on the information, the bike actually hit a police officer on his hand. He fell from the bike and broke his leg. The police took him to the Milton Cato Memorial Hospital. The matter is being investigated currently,” John told iWitness News.

The police chief told iWitness News later on Friday that he had received additional information that the teen was paralysed.