The turbulent spirits of Chateaubelair

When government turns outlaws, then democracy becomes a thing of the past. 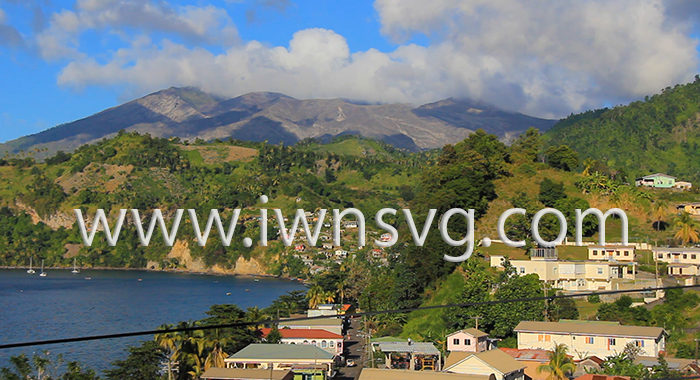 Chateaubelair and Fitz Hughes with La Soufriere in the background.

At the inception of the meeting, Cease-up began by using mild-mannered rhetorics, telling the people he was sorry for their intrusiveness for allowing the mining company from St. Lucia to move in on them like creeps. They appear like creeps in broad daylight without giving the farmers a heads-up about the project they are about to do. Minister Cease-up assured the people that the project would boost the economy of St. Vincent and the Grenadines. And would create JOBS for the jobless people of Chateaubelair. He told them not to worry cause they would benefit in the long run from the project.

When it was time for the Right Honourable Minister, One Vote, to elaborate on the matter, he started by making promises to the people on what he had in store for the neglected community of Chateaubelair. Most of what he said is what we have heard from time immemorial. You can call it old, good-sounding regurgitated rhetoric, spewed to the people over and over again, as they carry us around in the cycle of life. The orator said they would build a gas station and rehabilitate the rundown fish market. And they are going to enhance the infrastructure of Chateaubelair, along with other projects in the pipeline, to raise Chateaubelair from rags to riches.

The people listened as the Right Honourable One Vote tried to mellow their frustration by using sweet-sounding enticing promises. He sounded like one of those trickery televangelist preachers who preach prosperity gospel to an impoverished congregation. But the people weren’t going to let the Honourable One Vote submerge their distressed minds — or bamboozle their intelligence. Then when it was time for questions and answers. The people let loose on One Vote and  Cease-up like canons. Bow! Bow! Bow! They sounded their voice loud and clear for the press to hear their grievances. The people were equipped like soldiers on the battlefield to fight a justifiable war with the outlaws.

What I saw and heard sounded like when thunder collided with lightning on a storming day. The people’s mouths, armed with words of intelligence, resistance, and defiance, hit the island scholar left and right and centre. They had him cornered like a rat that couldn’t find a way to escape. Then his accomplice, the Right Honourable One Vote deliberate like one of those holy ghost preachers. The renegades were apologetic for moving unto the people farms like bandits! The atrocity commited shows a lack of respect for the people of Chateaubelair. The “outlaws” were dumbfounded and lost for words and were guilty as charged.

As a Chateaubelian, I feel proud to know that my people stood their ground, fighting like champions, fighting for a cause!

As a Chateaubelian, I am proud to hear how the turbulent spirits dealt with the Minister of Agriculture and the Minister of Vulture! They got a hell of a shock from Teacher Dory, who told them that not because we went to the University of Walilabu that doesn’t mean we are stupid. I was impressed with the intricate, charismatic Tari telling members of the government entourage that if they try to create havoc in Chateaubelair, he will file litigation against the government in the court. Everyone chuckled with laughter and cheer.

At the meeting, Mr. Kool, a community leader of Chateaubelair, lost his cool; he let them have it. He expressed his disgust for the way the government disrespects the farmers. The authoritarians couldn’t debunk the truth. The truth was in their faces crystal clear.

As I reflect on what took place at the meeting in Chateaubelair, I wonder why World Boss was absent from the show? Why did “he” send his amateur fighters in the heat of the battle to get beaten with the rod of correction? The senior lion seems as if he doesn’t have the strength to debate with the people anymore. He knew he was going get a tongue whipping! So he sent his amateurs ministers to fight with the angry crowd.

Why such a rush to drill holes and blast dynamite and possible to disturb Lady Soufriere. Two wrongs can’t make a right. According to John public, the geothermal project they started on the other side of the country anger Lady Soufriere. John public said that when the project manager sense danger, they pack their equipment and run. Just as Lady Soufriere began to take a nap, here come another master blaster.
I caution you, be careful what you are about to do to the landscape of Richmond. It might cause Lady Soufriere to spitfire.

2 replies on “The turbulent spirits of Chateaubelair”