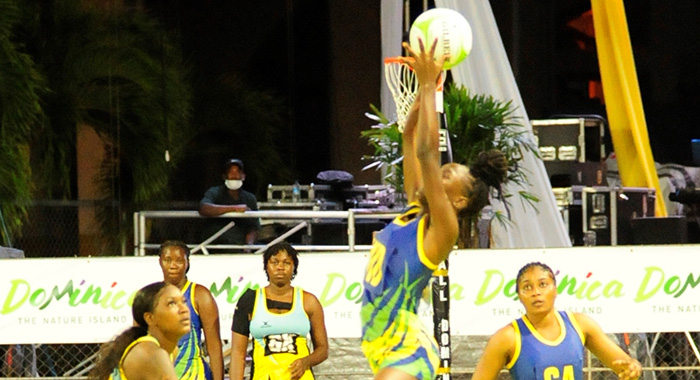 St. Vincent and the Grenadines won the OECS/ECCB International Netball Series in Dominica on Friday, emerging the top team after six days of intense competition in Dominica.

The team brought home the Gloria Ballantyne Trophy — name in honour of the late Vincentian netballer and administrator – and a number of other individual and team awards.

SVG entered the final day with St. Lucia locked on 16 points each, and it was winner take all in the final match of the competition.

SVG were leading 39-17 at the end of the third quarter when rain brought a premature end to the match.

A decision was then made to call off the match to avoid the risk of any injury to the players due to the slippery court.

Mary-Ann Frederick led all scorers with 32 points from 48 attempts for SVG, while Shellisa Davis secured 5 from 9 attempts and Zanique Vincent 2 from 5 attempts.

For St. Lucia, Roxanne Snyder scored 11 from 13 attempts, Aailyah Estephor 4 from 8 and Safiya Paul 2 from 4 attempts.

In addition to bagging the title, SVG came away with a number of individual awards:

Meantime, host Dominica ended their campaign with a win, as they got past

St. Kitts and Nevis to secure their first win of the tournament.

The duo had missed the first 4 games of the tournament due to illness, and they made their presence felt as they led Dominica to the comfortable 68-46 win.

Panthier scored 24 from 32 attempts and Seraphine 44 from 53 attempts leading Dominica to the win.

Aaliyah Gibson scored 24 from 32 attempts and Rochella Challenger 18 from 21 tries with jewel Thompson getting 4 from 5 attempts.

Barbados, also participated in the tournament as an invitational team, won all 5 of their matches to top the standings with 25 points.