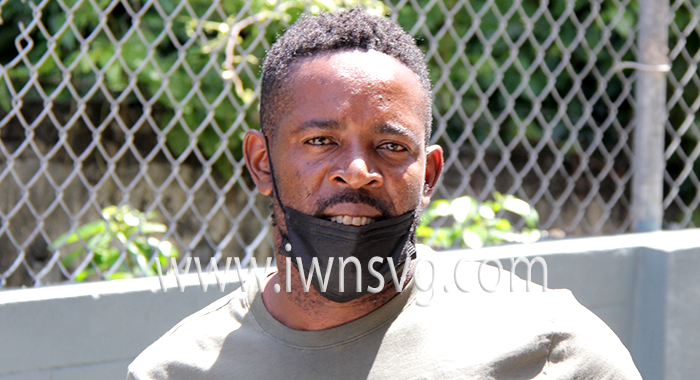 The defendant, Ken Findlay, leaves the Serious Offences Court after his sentencing on Wednesday, Feb. 23, 2022.

The van driver accused of obstructing traffic and failing to remove his vehicle during the anti-vaccine protest in Kingstown on Aug. 5 has been found guilty of two of the three charges against him.

On Wednesday, at the Serious Offences Court, Ken Findlay was ordered to pay EC$450 in fines or spend two weeks in prison.

His lawyer, Kay Bacchus-Baptiste informed the court that her client would appeal the conviction and asked that he be given time to pay the fine.

However, the Chief Magistrate Rechanne Browne Matthias, maintained that Findlay were to pay the fines forthwith.

“But we are appealing it,” Bacchus-Baptiste said.

“You said so,” the chief magistrate responded.

During the trial, the defence counsel had objected to the commissioner of police sitting at the Bar table and communicating with the prosecutor, Sergeant of Police 444 Jones.

The commissioner, in response, had noted that he is also a lawyer.

The chief magistrate found Findlay not guilty of a charge that he failed to give his name and address to Commissioner Police, Colin John.

Browne had reserved her decision when the trial ended on Feb. 16 after hearing the evidence of Adrianna King, an educator and political activist.

The court, however, did not accept into evidence a video of the incident, which King said she had extracted from her Facebook Live broadcast.

The prosecution objected to the video over issues of identification of the disc to which King said she had written the video.

One week earlier, when the trail began, the police chief, who was the complainant and main witness in the matter, told the court that he was on duty on the date in question, when he told Findlay to remove his van.

John, a lawyer and former assistant director of public prosecution, said that the defendant failed to comply, so he pulled him out of the vehicle and handed him over to another police officer.

John further said that Findlay failed to give his name when asked to do so.

During cross examination, the commissioner of police denied leaving his office to go and harass opposition New Democratic Party supporters and other people demonstrating against the actions of the government.

“I came on duty outside the courthouse,” he told the court.

The police chief and the investigating officer, Sergeant of Police Wendell Corridon, were the only two witnesses to testify on behalf of the Crown.

However, Findlay maintained that he did not obstruct the flow of traffic, saying that the street had been blocked off when he parked where he did.

Findlay said that on Aug. 5, 2022, omnibuses from Belair drove together into Kingstown and joined the protest.

He said that there were about 15 vans, which made one or two laps around the city with the protesters.

After making the laps around Kingstown, the buses were stationed in front of the High Court building in one line in one lane, Findlay told the court.

However, when the police chief approached him about two hours later telling him to move his van, he was unable to do so as the van were parked close to each other and the vehicles in front and behind of him had not been moved.

And, Findlay’s girlfriend Odette John, an educator, of Belair, who was in the van at the time, testified that the commissioner of police never asked him his name before arresting him at the anti-vaccine protest.