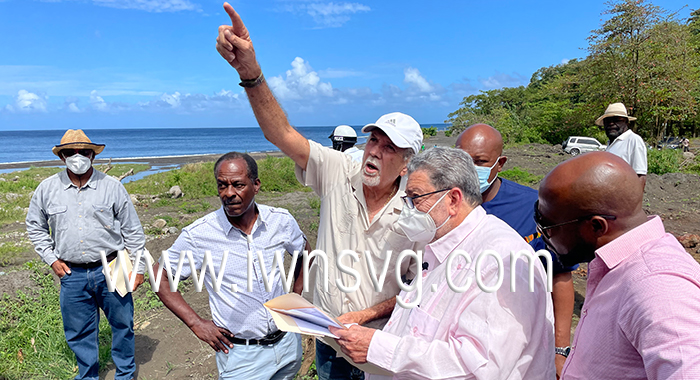 Minister of Urban Development, Senator Julian Francis, points out an area of the quarry sire (not pictured) to Prime Minister Ralph Gonsalves during a visit to Richmond on Friday, March 11, 2022. MP for North Leeward, Carlos James, is at left.

The government will sign an agreement with St. Lucian investor Rayneau Gajadhar to ensure the Vincentian market is supplied with aggregates from the quarry in Richmond before any is exported.

Gajadhar has obtained a 30-year lease of 58.8 acres of land for quarrying.

He told iWitness News on January 29 that 99% of the aggregates produced at the site would be exported and 1% would be for St. Vincent.

The disclosure came amidst a regional shortage of aggregates and as Prime Minister Ralph Gonsalves says his government has “over US$1 billion worth of capital investment” through 2025.

Gonsalves visited the quarry site on Friday for the first time since it became public in January that a lease had been granted.

iWitness News asked him about Gajadhar’s statement regarding the portion of aggregates to be exported.

“I asked [Minister of Urban Development] Julian [Francis] that question and I don’t know whether Rayneau understood him or you understand him,’ Gonsalves said.

“Julian said what the fella was talking about … for him, export was when you leave it by the jetty.”

In comments after Gajadhar’s statement to iWitness News, both Francis and Gajadhar have said that “export” meant moving the aggregates from the quarry to Lowmans Bay, for storage and distribution.

Francis, who was part of the prime minister’s delegation last Friday, said:

“Whether it go Lowmans or Venezuela or Guyana.”

iWitness News, however, said that Gajadhar was very explicit in his initial comments.

“But I am telling you what the situation is… I can tell you, there is no way a quarry is going to be here and … I going St. Lucia and ask Chastanet for quarry material, that we have quarry material here and government want it or private sector want it and you can’t get it.”

It was at this point that Francis told the prime minister about the agreement that is to be signed.

“You don’t know it yet, prime minister, but Edmond Jackson, the director general of finance and planning and I, and the minister of agriculture, we have already covered that area, with an agreement to be signed next week by Mr. Rayneau that the government dictates what is exported.

“In other words, our demand must be filled first before exporting and that is being signed and appended in view of Kenton’s (iWitness News’) interest in that particular subject.”