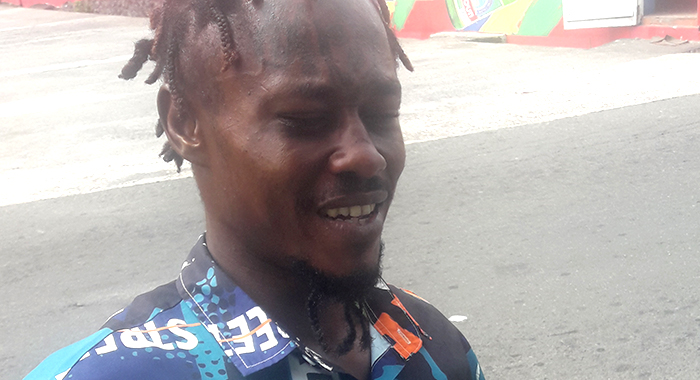 The Byera man whose mother narrowly escaped jail time when he failed to attend court after she bailed him, has been fined for an unrelated offence.

Police Corporal 670 Kenrick Williams told the court that on Sept. 4, 2021, about 3 p.m., Corporals Layne and Davy of the Traffic Department brought Burke and Asa France, of Biabou, to the Colonarie Police Station.

Williams said that both men had injuries and reported against each other.

He told the court that Burke began arguing with France, telling him, “Ah go chop yo up. As God me go chop yo up if me catch yo.”

Although he was warned, Burke continued with his threats, and was charged.

Burke-Caine represented himself in the trial, and, in his cross examination of Williams, said:

“Officer, when we reach by the station, you nah tell the crazy man (France) why he didn’t kill me?”

Williams said that was not the case.

“When the police take me by the station, isn’t the crazy man arguing with me, telling me he go kill me?” Burke said.

Williams said this was not the case.

In his evidence, Burke told the court: “Me ain’t know where he (France) came from, he came in my village (Byera) and took my clothes and foodstuff.

“I met him with some of my things and we started to wrestle and I got some my things.

“I took my things home and I realised that I didn’t have my phone so I went back.”

Burke said that while on his way, a red pick-up stopped and two uniformed police officers approached him and told him he was under arrest.

Burke told the court when he got to the Colonarie Police Station, Corporal Williams approached him and said, “Boy you nah dead!”

“I didn’t like what he said to me,” Burke told the magistrate.

He said Williams told France, “Boy mek you nah kill the man? You should ah kill him.”

The defendant said he told Williams, “Boy is so alyo ah wuk?” and the officer laughed.

Burke said France threatened him and he responded likewise.

“I feel like I wasn’t getting any justice, he (the policeman) watching me in my face and laughing,” Burke said.

“But, Your Honour, I did want to remind you of Nov. 15, last year,” Burke said, apparently referring to the matter in which his mother, Emaile Caine, had signed his bail bond.

“It was this same officer–” Burke was saying when the magistrate stopped him.

“Listen, I could only hear this case. If you have any issue go to the Human Resources in Kingstown,” the magistrate said.

“Even though the guy made threat at you, you didn’t have to use threat,” Pompey told the defendant.

Burke was fined EC$400 and was ordered to pay EC$200 forthwith or spend one month in prison.

He has to pay the balance in one month or spend two months in prison.