643 water tanks at Ottley Hall ‘not for personal properties, except for farmers’ 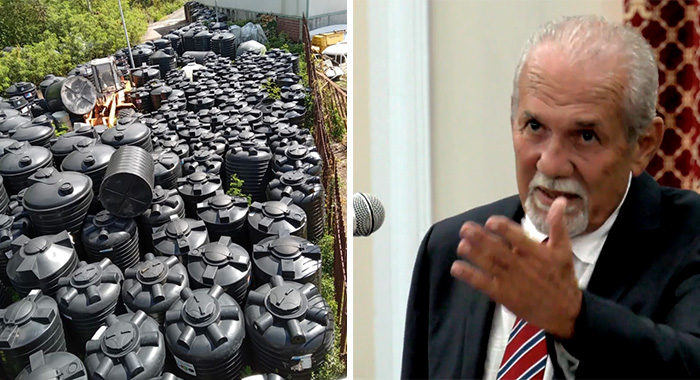 A composite image of the water tanks in Ottley Hall and Sentar Julian Francis speaking in Parliament on Thursday, May 5, 2022.

The government of St. Vincent and the Grenadines has 643 water tanks of various sizes in storage at Ottley Hall, Minister of Local Government Julian Francis told Parliament today (Thursday).

He, however, said that the tanks are not for personal properties, except farms.

He was responding to a question from MP for West Kingstown, Daniel Cummings, an opposition lawmaker.

Cummings said that there are numerous black plastic water tanks stored at the Ottley Hall Marina and Shipyard.

He asked the minister to tell Parliament the number of tanks that are there, whom they belong to, the purpose for which they were acquired and why they have not been used.

“Naturally these tanks came out of the disaster of La Soufriere and generous persons all over the world donated tanks to the government and people of St. Vincent and the Grenadines. And in fact, in the early days, we purchased a significant number of tanks out of Trinidad.”

He said the country received many more tanks than are in storage now.

“And tanks have been distributed throughout the country for different reasons,” Francis said.

“Everybody in St. Vincent wants a tank but we can’t give everybody a tank.

“Those tanks are being kept by NEMO at the satellite warehouses as a backup for local, regional and maybe national disasters for storage of water. Emergency shelters, schools, police stations, health centres and other government buildings, some have received tanks.”

He said the government facilities that have received water tanks have a concrete elevation on which to put it.

“There’s some schools that have a cantilever not just a cantilever because a 1,000-gallon tank, you wouldn’t want to put anything smaller than that at a school is 1,000-gallon by 10 is 10,000 pounds,” he said, using his estimates of the weight of a gallon of water.

He said that at other non-public buildings, such as churches, that are used as emergency shelters, “the elevation in certain yards of these institutions are not compatible with putting a tank full of water.

“Because if you put it flat on the ground, to access the water, you either have to dip it out, which is unsanitary, or you use a pump to pump it out because you will not get it gravity fed to your house. Because it is lower than your washbasin pipe, and your showerhead, and your kitchen.

“So there is a debate going on — not a debate, a discussion — of the cost for doing those buildings, where we ought to be putting some of these tanks to make sure that we get a pedestal to put them on.”

He said that the responsibility now falls on him and he has “asked sufficient questions about the tanks that we have, that he who speaks most, gets the most work sometimes.

“So it ended up that I have to chair a committee to make sure that we get tanks where they ought to go.”

Francis said he could not say what number of tanks would go where as this is a work in progress.

“What I do know is that they are not for personal properties, except for farmers. And for farmers, it is not for necessarily for their house, but for their farming,” he told Parliament.

He said that before “this disaster” the Minister of Agriculture distributed tanks by a different funding source.

“If you go to the farms, you see a lot of the tanks there on the ground…

“And that I don’t want us to be encouraging individuals to come and beg for a tank because we don’t have enough tanks to give everybody even though you live in an area, because then you have to go to needs assessment tests. If there are 300 people in the village, and 10 of them come to you to give you tanks, the other 290 go want.”

But Cummings wondered if the Francis and his team were aware that storing the empty tanks in the sun would degrade them significantly.

“If they have water in them, it’s a completely different scenario,” said Cummings, a water engineer.

“I’m very much aware of it…” Francis said. “… I understand that and there is a speed that we will pick up with that we’ll try and have them installed.

“It is the cost of the pedestals,” he said, adding that building a pedestal for a 1,000-gallon tank can cost more than the tank.

But Cummings said that the tanks do not have to be placed on pedestals, but can be placed on the ground and fitted with a small solar pump.

The opposition lawmaker asked whether consideration has been given to help some residents of the Grenadines “for whom storage is so essential to augment their storage to tide them over the dry season.”

Francis, who is also minister of Grenadine Affairs, said a significant number of tanks have been sent to the Grenadine islands at the public level.

“Bequia, Union Island, Canouan on Mayreau tanks were sent there, prior to the 643 that we have left.

“And after three months ago, when we took this present count,” Francis said.

“There are 5000 persons in Bequia. They might have more than 25 homes. Nobody is going to refuse a tank even though their tank is working. Once their neighbour gets one, they’re entitled to one too…

“And these pumps Solar Pumps are movable. They will be removed by somebody who the pump don’t belong to. When you put the tanks up on the pedestal, you build a platform, they can’t move it.

6 replies on “643 water tanks at Ottley Hall ‘not for personal properties, except for farmers’”