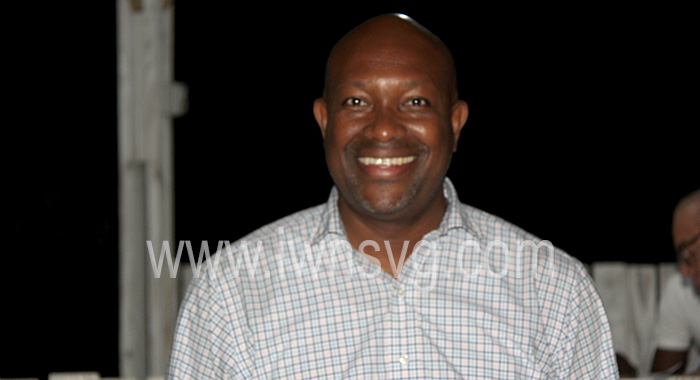 Minister of Agriculture and Industry, Saboto Caesar at the event at Coconut Grove on Friday, May 6, 2022.

Minister of Agriculture Saboto Caesar is encouraging traditional growers of marijuana to apply for permits to plant the crop under the government’s medicinal cannabis regime.

“There have always been traditional cultivators. And first of all, I want to congratulate the traditional cultivators who have gone to the medicinal cannabis authority, and have received their licenses,” Caesar told iWitness News on Friday, at Canash Bay, where Greenhouse Café, a medical marijuana consumption lounge was opened at Coconut Grove.

Following the consultation, the Medical Cannabis Authority issued the patients a permit to buy medical ganja products for a year.

The patients could also fill their prescription at the dispensary at the venue and use the medical marijuana products at the lounge.

iWitness News asked Caesar, who also has ministerial responsibility for Industry, what he would say to people who were traditionally involved in marijuana, and might have hard feelings about what is taking place at Greenhouse Café.

iWitness News asked the minister to respond to the view that these growers had traditionally invested the time and taken all the risk to build the nation’s reputation for cannabis but other people are now benefiting under the legal regime.

“I am happy that you asked the question, because from time to time — and we see in newspapers — persons who are still arrested for possession of cannabis,” Caesar said.

He said that in those instances, he would ask himself and those positioned to advised him, whether the person had a licence to cultivate marijuana.

“And really and truly I want to use this opportunity to encourage traditional cultivators to go and register and get your licenses. I know that person sometimes have problems with lands — they don’t have adequate lands. Well, leave a report there. Let’s see how we can work together.”

He, however, noted that building something like the facility in Canash where the medical marijuana cafe is located “costs a lot of money.

Caesar mentioned RASFARCO, a group of Rastafari, who have a memorandum of understanding with Green Lava, a medical marijuana company, that will buy about 20% of what RASFARCO produces.

“Producing at the quality to be integrated into that system also is a hurdle and we have provided assistance and we will continue to provide assistance to these traditional cultivators and groups so that we can be fully integrated,” Caesar said.

He said he expects over the next two or three years “that we will witness a further integration of traditional cultivators as stakeholders in the cannabis value chain in St. Vincent and Grenadines.

“But, the integration is going to take place faster, the more high-end investment that we have because it will create a local demand.”

He said he would like to see “a local indigenous branding of medicinal cannabis in the country”.

This, the minister said, is probably where the Medicinal Cannabis Authority “can do more to integrate doctors probably from the public sector, because a traditional cultivator will not have direct access to a doctor to say if you come and do medicinal cannabis, in a setup that I have, that they could bring a doctor there”.

There were three doctors prescribing medicinal cannabis at Friday’s launch.

Caesar said that while cannabis in SVG has come a long way, the country has “a history of being very conservative.

“And I think that having a pure medicine or wellness industry or not going to recreational is in sync with the conservative characteristics that we have exhibited over the years.”

He noted that during the debate of the medical cannabis industry legislation in parliament, the opposition had called for full legalisation of marijuana for medical use.

“… that was also supported by the Waiting to Exhale document done by Professor Rosemary Belle Antoine, done for CARICOM,” he said, speaking of the document produced after a commission set up based on a recommendation of Prime Minister Ralph Gonsalves.

“But we decided we were not go in the full length. And we were going to just stick within the laws.”

He said that decriminalising marijuana for recreational purposes could have compromised SVG’s banking relationships.

“And at the end of the day, that would have blown up in our faces, but I am not wishing anybody bad, any other country who may choose a particular path.

“All we are saying, we chose the conservative path. And for persons who are speaking about this, this is not a radical move. This cannot be considered radical. This is a very conservative operation in the general scheme of things.

“There are some places you just walk in and you just get what you want and you leave, you could take it home and do whatever you want. But here, I’m really happy that it’s strict and stringent,” said Caesar, who said he had visited medicinal cannabis consumption lounges in Jamaica, Canada and the United States.

Regarding that Rastafari community, Caesar said that the government had taken a bill to Parliament to allow the use of cannabis for religious purposes.

“And during this month, I’m going to re-engage the Rastafari community, because it’s a very long legal process,” he said, adding that the government would have to retain international legal counsel.

“I know Professor Barry, of University of West Indies, has basically given a green light that he will be willing to take this case up with the United Nations,” he said.

The products sold at Greenhouse Cafè are produced by Medicinal, a medical marijuana company in SVG.

Ask why people should buy Medicinal’s products rather than they would traditionally do on the streets, Marie-Helene Tremblay, general manager of Medicinal, said:

“Well, cannabis in St. Vincent must be bought after getting a consultation with a doctor. It’s in St. Vincent Cannabis Industry Act. So we encourage the patients to follow the act. We do enjoy working with traditional farmers. So we hire few of them. And we also have … farmers programme where we train them to our protocols and they train us as well. So, it’s an exchange of knowledge.”