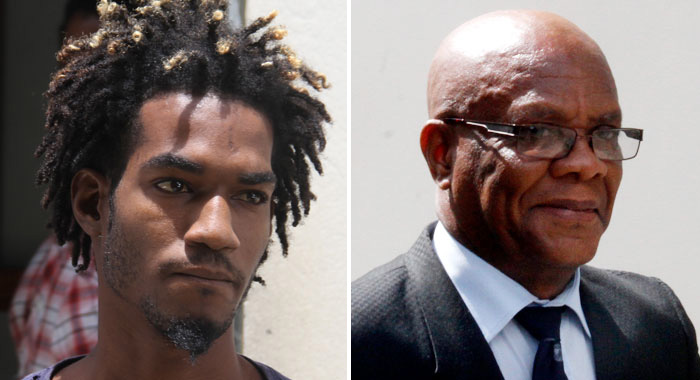 Park Hill resident Stanley Gumbs, who Magistrate Bertie Pompey would jail for 11 months, told the court, mid-trial, that he was not comfortable with him adjudicating.

“I ain’t feel comfortable at all as me and this magistrate here get in altercation 2018 ah nuh. Honestly, this is unfair to me. This is unfair,” Gumbs said during cross-examination at the Colonarie Magistrate’s Court, sitting at Georgetown.

“Just conduct yourself or I will charge you for contempt of court,” Pompey responded during the April 28 trial.

“You will charge me?” Gumbs said.

Pompey warned him again, “Conduct yourself! This is showing me the type of person you are — the behaviour you are displaying there.”

In handing down his sentence, Pompey noted the defendant’s convictions included possession of an offensive weapon, and another, in 2015, for assault causing actual bodily harm.

“I wasn’t even here,” Pompey said.

“In 2018,” the defendant said. “You ain’t charge me in this same court here — with alyo one-sided behaviour?” Gumbs said.

In 2018, Gumbs appeared at the Serious Offences Court where he was fined for swearing in court at the then prosecutor at the Colonarie Magistrate’s Court, sitting at Georgetown.  Pompey was the presiding magistrate.

In the April 2022 matter, Gumbs was sentenced to one month in prison for using threatening language, four months for possession of an offensive weapon and six months for assaulting Albert Cupid, causing actual bodily harm.

Gumbs told the court that he had acted “under vexation” when he committed the offences.

At the trial, Cupid told the court that on Dec.15, 2021 at 8:10 p.m., he was on his way from his home to visit his neighbour, Juliet, when Gumbs ran up behind him and asked if he was not paying for “the thing”.

Cupid said he asked Gumbs, “Which thing?” And Gumbs “held on to me shirt and he box me five times in ah me head”.

At this point, prosecutor, Corporal of Police Delando Charles interjected, “Mr Gumbs! This is not a joke! I see you’re laughing.”

Cupid continued his evidence, telling the court Gumbs pushed him down, causing him to bruise his right elbow, right ankle and “stump off me little toe and big toe on the right foot”.

Cupid said he opened Juliet’s kitchen door and went inside to escape the defendant, who went after him with a “Collins” cutlass.

Juliet told Cupid where to walk so that Gumbs would not see him and he went to the police station and reported the matter.

However, in his defence, Gumbs told the court that on his birthday, Dec. 24, 2021, Cupid burnt all of his clothing and threatened to kill him and his cousin, Japheth.

“I don’t interfere with people, I have an ignorant mentality is right, but me ain’t just going come go and interfere — me nah crazy. Me is tell him I go kill him if I catch him because I was under vexation but I never had no cutlass in my hand.”

He said that Cupid habitually drinks rum and falls and sustains bruises.

“I never go round dey. Me and Juliet ain’t no friend,” the defendant said.

He then told the magistrate that he was not comfortable with him presiding over the trial.

As the matter continued, the prosecutor put it to Gumbs that he had a cutlass when he went after Cupid.

After hearing the evidence, Pompey told Gumbs, “You’re found guilty as charged for all three offences.”

After handing down the sentence, Pompey told Gumbs, “Your behaviour is stink, to say the least, and really warrants a greater sentence.”

Before dismissing the defendant from the dock, the magistrate said, “If you come back before me at any time … I will not be surprised.”

Four police officers had to restrain Gumbs as he was taken to the holding cell at towards the front of the Georgetown Police Station, the same building in which the court is situation.

“Boy me have to come out ah jail ah nuh,” Gumbs told the officers.

“Me could walk by myself ah nuh, what happen mi handicap? Last time alyo hold me and beat me up, alyo let mi go! Let me go nah man,” he said.

Gumbs continued his ranting in the holding cell.