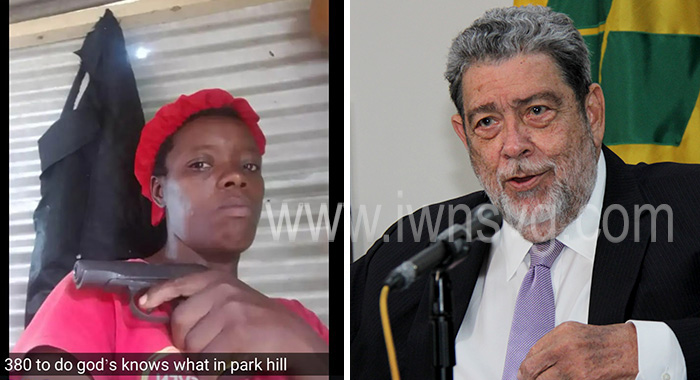 The Park Hill woman who was, on May 9, jailed for 38 months for possession of an unlicensed firearm with which she posed for a photo that was later published on Facebook has been released after only eight days in prison.

Prime Minister Ralph Gonsalves confirmed on radio today (Wednesday) that the Committee on the Prerogative of Mercy granted clemency to Jemelia “Gaza” Bailey.

Informed sources told iWitness News that a no application for Glendon De Freitas, 28, also of Park Hill, who was also jailed for 38 months for possession of the same firearm, was before the Mercy Committee.

Gonsalves, who is also minister of national security, and parliamentary representative for North Central Windward, which includes Park Hill, said there are three conditions attached to Bailey’s release.

“One condition is that she reports once per week to the police station in Colonaire. Secondly, that she doesn’t travel overseas, except with the written permission of the chairman of the Committee of Mercy, and thirdly, she be not convicted of any offence which carries a term of imprisonment of 12 months or more,” Gonsalves said.

He was speaking during his weekly programme on NBC Radio, during which he also condemned the recent killings in St. Vincent and the Grenadines, most of which resulted from gunshot injuries.

He said that there were persons who were sitting but were not members of the committee and provided advice and information, namely Permanent Secretary in the Minister of National Security Hudson Nedd and Superintendent of Prisons, Timothy Hazelwood.

“Before us were three sets of documents,” Gonsalves said. “A document by the Superintendent of Prisons, a document by the Ministry of Social Development about the lady and her four children — two of them girls, one just wrote Common Entrance and one who is 14 and going secondary school and two boys under 10 — full report from Social Development and the transcript from the magistrate’s court as to what occurred at the trail of this lady and the other accused.”

Gonsalves said that Bailey turns 32 in December, adding, she went to secondary school and is a farmer.

“It is not open for me to say to you all the details of the discussion by the Committee of Mercy except to say that we considered all these three reports which were before us and the committee agreed under the constitutional provisions dealing with the Prerogative Committee of Mercy, they agreed and upon their own decision and advice, as prime minister, I advised Her Excellency [Governor General Dame Susan Dougan] to effect the release, subject to those conditions. And that is what happened.”
The prime minister said he had seen media stories that “reported fairly accurately what transpired in the court.

“And that transcript which was provided by the magistrate’s court was looked at   very carefully by the committee plus the other reports and there was unanimity on the question.

“I am not going to outline to you chapter and verse except to say that in the view of the Committee of Mercy and the advice which I tendered to the governor general under section 65 of the Constitution, we felt that this decision was within the four walls of what the Committee of Mercy is called to do, and I, as prime minister, felt that what I did in that regard was proper and correct,” Gonsalves said.

On May 9, Bailey and De Freitas pleaded guilty at the Serious Offences Court to a joint charge that on May 7, at Park Hill, they had in their possession one .380 pistol, serial number unknown, without a license issued under the Firearms Act.

In presenting the facts, prosecutor Station Sergeant of Police Renrick Cato told the court that on May 7, about 5 p.m., Sergeant 523 Collin Pitt, stationed at Colonaire Police Station, saw a post on Facebook with Bailey holding what appeared to be a firearm across her chest area.

The post included the words “380 to do god’s knows what in park hill”.

As a result, Pitt headed a party of police officers to Bailey’s home in Park Hill and executed a search warrant.

Bailey consented to the search and the police found the firearm in a basket of clothing in a storeroom.

De Freitas was met in the yard also and police also cautioned him and he said, “The gun belongs to me.”

In handing down her sentence, Chief Magistrate Rechanne Browne noted that the Facebook post included the words, “380 to do god’s knows what in park hill”.

Browne said the quotation showed an intention to cause harm, and, in keeping with the sentencing guidelines, the court viewed the seriousness of the offence as high.

“You are living in St. Vincent and the Grenadines. I believe you know of the problem. There is a problem in Park Hill — elsewhere,” the chief magistrate said and noted the three shooting deaths in the country the previous weekend.

She said the fact that the post appeared on social media no doubt created alarm and panic, adding that she was certain that there was some alarm in Park Hill.