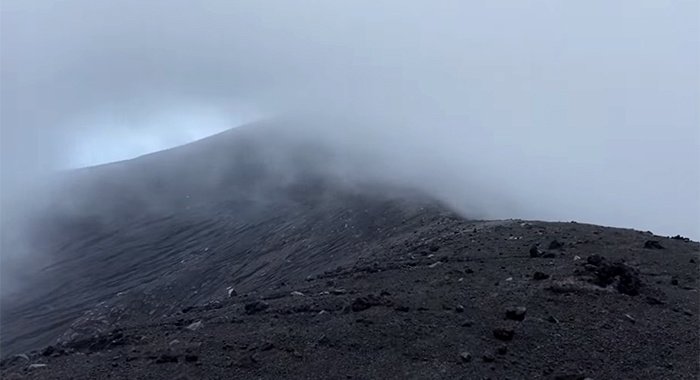 The hiker who was missing on the slopes of La Soufriere volcano Tuesday night after he reportedly sustained injuries during a fall hours earlier was found alive around 1 a.m. Wednesday.

At 4 a.m. the group of hikers and other volunteers who went up to the mountain to search for him were descending the volcano.

The condition of the injured hiker, a Vincentian man, is not known at this time.

The injured man is said to be an experienced hiker who has climbed the volcano multiple times since it last erupted.

The volunteers, including some members of the original hiking party, went up the mountain Tuesday night after first responders decided that it was unsafe to conduct the search during the night.

iWItness News understands that the summit of the volcano was hazy and misty with low visibility on Tuesday.

In some instances, visibility on the mountains can be as low as 20 feet.

The volcano hiking trails have not been fully rehabilitated after the April 2021 eruption.

Further, the slopes have numerous gullies, some as deep as 25 feet.

First responders in St. Vincent and the Grenadines are said to have decided that an injured man on the slopes of La Soufriere volcano would have to stay there for the night.

The decision was made in the interest of rescuers, as the slopes of the volcano, with gutters up to 25 feet deep, present significant dangers to people on the mountain.

iWitness  News was reliably informed that a group of 13 people climbed the volcano Tuesday morning and the man left the group and began descending the mountain alone.

The man is said to have fallen and lost consciousness on the descent of the 4,048-foot volcano, which last erupted in April 2021.

He was able to make contact by telephone sometime around dusk, indicating that he was unable to walk.

Two members of his hiking party climbed back up the mountain but were unable to locate the injured man, and descended sometime after 7 p.m.

First responders are said to be mobilising a party to for early Wednesday morning and were looking for persons familiar with the terrain of the mountain after its eruption in April 2021.