Coroner to hold inquest into death of detective, his alleged killer 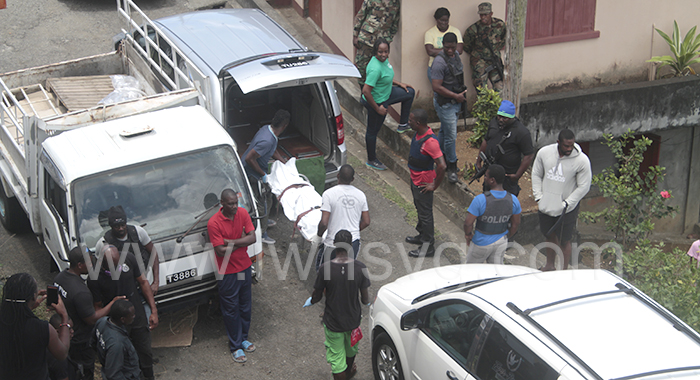 Funeral home workers remove the body of Gleason Lewis from the scene in Campden Park on April 26, 2020.

District 1 Coroner, Rickie Burnett will, on Friday, conduct an inquest touching the deaths of a police officer and a civilian who died after being shot in Camden Park on April 26, 2020.

Police have said that they shot and killed Gleason Lewis, 36, after he shot and killed detective Sergeant Philbert Chambers, 30, and injured Police Constable 700 Verrol Sam, who were among officers executing a search warrant at Lewis’ home.

The deaths have captivated the interest of the nation over the past two years, especially as Lewis’ parents, Mr. & Mrs. Glasley Lewis, as well as their lawyer, Kay Bacchus-Baptiste, told the media in June 2021 that they believe that Chambers fell to friendly fire.

The Lewises have said that the footage recorded to a DVR from a camera that the police did not know was still running, should have captured what transpired at the house when the two deaths occurred.

On April 19, Burnett, who, as senior magistrate, presides at the Kingstown Magistrate’s Court, informed the court of his intention to hold the inquest on June 3, at the court building.

It is left to be seen whether Burnett would allow the public or lawyers to attend the proceedings.

The Coroners Act says that the room or building where a coroner’s court is held shall not be deemed an open court.

The law further says that a coroner may order that, except for the jury, no person shall have access to, or be or remain in the room or building in which the inquest is held, without the permission of the coroner “if it appears to him that the ends of the inquiry will best be answered by so doing”.

The law further says that no legal practitioner shall be entitled as of right to appear in any proceeding before a coroner’s court.

However, the coroner may, if he thinks fit, on application, permit such appearance.

On Thursday, Bacchus-Baptiste told iWitness News that she had written to the coroner seeking permission to represent the Lewises.

She said the act permits this, but she hadn’t received a written response.

“In fact that call that I just took was a message from the magistrate’s clerk that having received the letter, I don’t really need to wait for him to respond, just turn up. So I will go there tomorrow, DV, to represent them at the inquest.”

Bacchus-Baptiste said she has represented people at coroner’s inquests before.

“It helps to cross examine some of the witnesses. Certainly, I’d be interested in those police witnesses with the evidence they have to give — to cross-examine them on the veracity from the standpoint of who really shot whom, based on my clients’ case. So, in that respect, I will be assisting them to get to the truth as to what really happened to their son.”

She said that the Lewises are “somewhat relieved” that an inquest would be conducted and are “looking forward to receiving justice for their son and learning the truth.

“I am not privy to what evidence they are going to lead because in a normal case, they will disclose but not in this case. I just have to go, play it by ear, based on my instructions and participate in the hearing. If the magistrate allows me, I can do that – ask questions that will be in the interest of the Lewises. I have done it before. It’s not anything new.”

Meanwhile, Fitzborne Chambers, a retired corporal of police and older brother of the slain detective, told iWitness News separately, on Thursday, that his family had not been formally notified of the inquest.

He, however, said that his family hope to attend, if the coroner allows it.

The coroner can conduct the inquest without a jury.

However, if the coroner so elects, the act says five jurors would be selected by lot from among 10 summoned in the same manner in which jurors are selected for high court hearings.

The Coroners Act further says that after hearing the evidence, the jury shall give their verdict, “setting forth, so far as such particulars have been proved to them, who the deceased was and how, when and where the deceased came by his death, and if he came by his death by murder or manslaughter, the persons, if any, whom the jury find to have been guilty of such murder or manslaughter, or of being accessories before the fact to such murder”.

4 replies on “Coroner to hold inquest into death of detective, his alleged killer”