PM Gonsalves has ‘a plan in mind’ for regional air travel 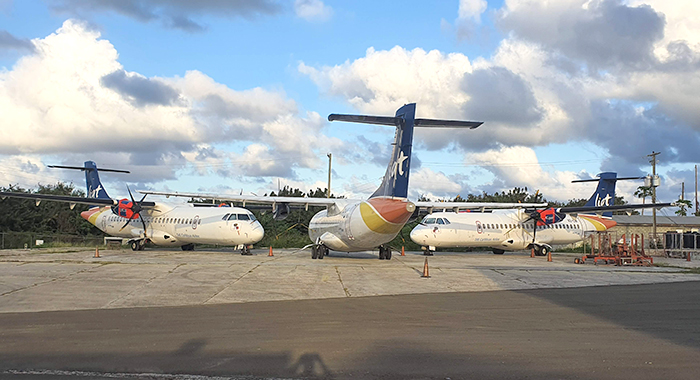 Grounded LIAT aircraft in Antigua in April 2020 after the COVID-19 pandemic began to impact the Caribbean.

KINGSTOWN, St. Vincent (CMC) — St. Vincent and the Grenadines Prime Minister Ralph Gonsalves, who earlier this week spoke of the challenges he faced as he was preparing for a number of overseas trips, including travel through the Caribbean, now says he has a “plan in mind” for regional air travel.

While he did not disclose the plan to listeners of a radio programme here, Gonsalves detailed the history of the failed regional carrier LIAT, an entity he served as chairman of for the shareholder governments.

The airline is owned by the governments of Antigua and Barbuda, Barbados, Dominica and St. Vincent and the Grenadines (SVG).

Antigua and Barbuda Prime Minister Gaston Browne said previously that a decision had been taken that would allow Barbados and SVG to turn over their shares in LIAT to St. John’s for EC$1.

Gonsalves told radio listeners that he faced much opposition from regional governments and their populations, many of which, he said, are now calling for the revival of the airline.

Gonsalves said that air transportation in the region is now “a real mess”, and that he had soldiered on for two decades, having come to office, in March 2001, at a time when governments across the region “were bowing and scraping before Allan Stanford”, the Texan businessman and founder of the failed airline, Caribbean Star, who was later jailed for life in the United States for operating a Ponzi scheme.

Gonsalves said he stood up to Stanford, adding he had maintained that the Texan should not control the region’s skies, even though he had relocated to Antigua.

He noted that at one time Kingstown was the major shareholder in LIAT, until the US$65 million re-fleeting, which was done under the Aristotelian principle of equity among equals, proportionality among unequals.

After the re-fleeting, the shareholding of Barbados and Antigua increased relative to St. Vincent’s.

“But still, I was chairman and nobody wanted anybody else to be chairman because I was LIAT’s champion during all that time. During all that time, you know all the licks I getting,” he said, adding this situation continued as recently as April 2020 when opposition lawmakers here criticised him for budgeting  one million US dollars for the financially troubled LIAT as the coronavirus (COVID-19) pandemic began to hit the region with countries shutting down their borders.

“And across the country, people who are now talking in favour of LIAT, they join the bandwagon. But I didn’t mind all that because I knew it was the correct policy,” Gonsalves said, noting that one of the main regional governments in LIAT withdrew, saying it  could not invest any more money in the airline, withdrawing also the one million US dollar investment.

Gonsalves said that at the same time he pleaded with LIAT staff and even attended several meetings in Antigua on the issue.

“And anytime they pull a strike or a go-slow, it costs EC$750,000, one million, EC$1.5 million for every day. I just couldn’t understand how people who working in the company would want to do this and every time they coming saying is management problem.”

He said there were management issues, but he told staff that their frequent strikes amounted to “cutting down your own breadfruit tree.

“And the two things, the lack of appetite by other governments to put money in and the behaviour of some pilots, some engineers, some flight attendants, “contributed to the airline’s financial troubles, Gonsalves said, noting that when a flight attendant called in sick at the last minute, this threw the airline’s schedule in chaos.

“Remember I always said that LIAT, a regional air transport carrier, at best is a marginal financial proposition but it is a vital economic and social matter of the highest importance.

“That was what I stated all the time: That regional air transportation is a public good and that governments served by LIAT should put as part of their budget on an annual basis so the sum of money to help this important carrier.”

He said that St. Lucia, whether under the St. Lucia Labour Party or United Workers Party government, was “actively against LIAT” and other countries said that the headquarters had to be moved from Antigua.

“I said, ‘but that’s not something which is realistic now let’s work together and see if we can make changes,” he said, adding that Dominica eventually came on board “in a small way” and Grenada, under Prime Minister Dr. Keith Mitchell, put in a small bit of money “towards the end.

“But there were no takers. Trinidad, after [Prime Minister] Patrick Manning, all the governments said, no, they’re not doing anything with that. And that’s what happened.”

He said a former pilot, whom he described as “Big Jim — a Barbadian white man who lives in Canada”, had “every solution.

“He wrote me a whole set of things. I ain’t bother with him. Malign everybody on the internet. Business people of Dominica, a fella, he wrote a whole set of things, he meet me on the plane. I had a journey once and I was just wishing for this flight to done. He just harass me. My mother bring me up with manners so I just listen but inside of me, I was boiling because of his ignorance about air transportation and he lecturing me no end.”

Gonsalves said that journalists in St. Vincent and the Grenadines, Grenada and other places where he appeared on media programmes and “ordinary people” ask why he was putting so much money into LIAT.

“I go by an airport, LIAT is half an hour late or something, they have some problems. Is a scene they creating in every single airport in the Caribbean because I was recognised as Mr. LIAT.

“But I took all the slings and arrows because I knew that what I was doing was right. But towards the end, the failure or refusal of other governments to come in and give support and the internal problems with some pilots, flight attendants, some engineers, I just had to give up.”

Prime Minister Gonsalves said the phrase ‘”leave it to the private sector” was also a mantra.

“We had nearly 40 flights and in the busy season more than 40 flights a week (to St. Vincent) with LIAT,” he added.

Earlier this year, Prime Minister Browne appealed to Caribbean trade unions to re-think their positions regarding the latest offer made to laid-off workers of the airline.

The Antigua and Barbuda government said it was providing two million dollars “to meet partial satisfaction of the cash component of the compassionate pay-out” to former local employees of the regional airline, LIAT.

On Tuesday, former LIAT employees based in Barbados, complaining of being  “disappointed and frustrated” by the way they have been treated over the last two years by Caribbean governments, sent a petition to Prime Minister Mia Mottley calling for the payment of severance owed to them.

“We have waited and pleaded on deaf ears for the shareholder Governments to do the right thing by seeing that we receive monies owed. Our financial situation is growing extremely dire by the minute,” the former LIAT workers said in their letter to the prime minister.