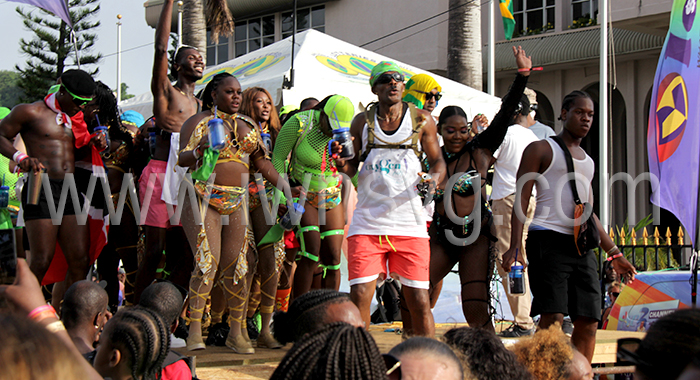 COVID-19 protocols were relaxed during Vincymas 2022.

Large numbers of people partied together regardless of their COVID-19 vaccination status, and were not required to wear masks or physically distance themselves during the activities.

“To be honest, I feel that the government has declared that the pandemic is over in the way that they carnival and so on,” Andrew John on the union’s weekly radio programme.

“So I think the prime minister, to me, is only taking the channel, in accordance with the fact that he pushed all the protocols aside, so he’s getting back now to put in the teachers where they were when he mistakenly and wrongly dismissed the teachers from their jobs.”

John was speaking on Xtreme FM, on Sunday, hours after Prime Minister Ralph Gonsalves announced on WE FM, that the question of rehiring teachers fired last year for failure to take a COVID-19 vaccine will arise in the post-carnival period.

But John spoke of the difference between rehiring and reinstating teachers, noting that the issue of a break in service would arise.

“… we have to remember that your pension and gratuity is based on the number of years you have as a teacher,” John said.

“So this whole thing of rehiring teachers is nonsensical, as my brother said that’s nonsense; nonsense. You can’t take a teacher with 30 years and tell them you’re going to — so where you going to restart them? What you’re going to hire them as? As a Teacher 1?  What nonsense — I don’t understand. It is not logical, and he knows it.”

John also noted that the Teachers’ Unions, along with the Public Service Union has sued the government over the vaccine mandate and resulting dismissals.

“We have a matter that is coming up and they’re operating as if there is not a matter in court,” he said, adding that the union is also restructuring its operations “from the bottom up, having the committees and the branches and so on reactivated…

“So when we take action, because action will be taken, if they don’t make the right decision –” John said.

He noted the resignation of UK Prime Minister Boris Johnson, under political pressure, and that protesters drove the president and prime minister of Sri Lanka out of office last week.

“There is a situation in Sri Lanka that unfolded over this weekend. People have power. And it is not up to a few leaders whom we have elected to represent us to be doing their own thing…

“I saw the  president of Sri Lanka  running, carrying his luggage. The people chase [him]. One person said, ‘Today is independence day in Sri Lanka; not 1948.’ ‘Today’, when they got rid of the tyrant and the people who are basically oppressing them. The man said the president did not resign, he was chased from the place; he was chased.”

John said the government has to understand that  it cannot be telling people “this is what the people want.

“The people are saying to you, ‘We don’t want this.’ For the longest while, they have been saying that.

“You’re representing us you are supposed to be taking care of your constituents. Instead of that, you are treating people as if they don’t have any say. These people need to look at this carefully and reconsider.”

He said the union has been “playing a key role in getting us from point A, where they dismissed people and expected that everybody would have just fall in line.

“Additionally to that, as Brother Robinson mentioned, we are seeing a lot of adverse effects on our teachers from the vaccine,” John said, referring to the union’s president, Oswald Robinson, who also spoke on the programme, saying that the union would take “radical action” if the teachers are not reinstated within two weeks.

“And what are we seeing now? A government that is insisting that they must have their way whether they are wrong or they are right. And the fact that the prime minister is saying that he has to consult this and consult that, all he’s doing is passing the buck.”

In his comments on Sunday, the prime minister said the government would have to consult with the chief medical officer and other relevant authorities before arriving at a decision.

“It is his (PM’s) responsibility. Mr. Robinson pointed out he is just looking for an excuse. But all he has to do is man up as a man and give the people they job and let us resume our development.

“This is our country. Let us continue on the developmental path. You have our children out there suffering. We have our teachers suffering. For what? For what reason? What is the reason behind it?

“So, I don’t want to carry on because this is a vexing issue for me. I’ve been working on this thing for a long time. And you could understand how I feel at the end of the day that they are coming to say about rehiring, as if you’re begging them now to give you a job, when you were wrong; you were wrong.

One reply on “Union says carnival was govt declaring pandemic over”