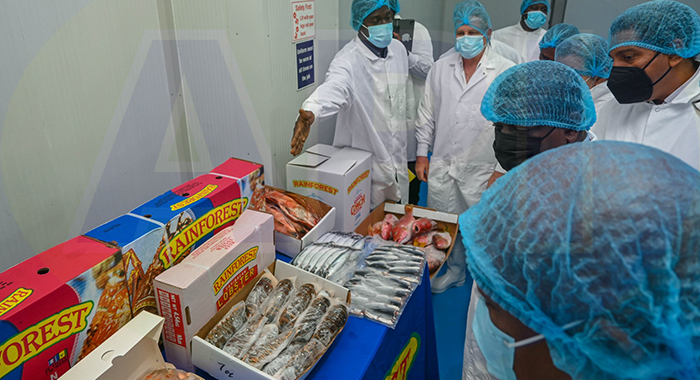 A worker showcases some of Rainforest Seafood SVG’s product packaged for export, at the opening ceremony on Friday, July 15, 2022. (Photo: API/Facebook)

As Rainforest Seafood SVG Ltd officially commissioned its 25,000 square fish processing plant in Calliaqua on Friday, Minister of Fisheries Saboto Caesar sought to assure Vincentians that there will be enough seafood for local consumption.

“And I know that the housewife in San Souci, the housewife in Lauders, the housewife in Calliaqua, sometimes they ask the question. So if we put so much of our marine resources in these facilities, will we have enough for ourselves?” he said, mentioning the names of two communities in his South Central Windward constituency.

“And I want to say this to all Vincentians, that we are going to ensure that there are sustainable measures put in place to protect and to ensure food security and food sovereignty in this country. Under our watch, fish would always be affordable, accessible, and available,” the minister said without further elaboration.

Caesar, who is also minister of industry, said that the country will see “the largest fleet expansion programme ever in St. Vincent and the Grenadines.

He thanked Kingstown Co-operative Credit Union for working with the Government of St. Vincent and the Grenadines and with stakeholders, saying that they recently signed a memorandum of understanding.

“And over 90 fishers in St. Vincent and Grenadines have already applied and will be approved very soon to put fish not only in local dishes, but in dishes across the world.”

Rainforest Seafood is headquartered in Jamaica, whose Minister of Agriculture, Pearnel Charles Jr., also attended and spoke at Friday’s event

Caesar said he and Charles shared the stage at the 2022 United Nations Ocean Conference, held June 27 to July 1 in Portugal, where they discussed important issues of sustainability.

He said that the Rainforest Seafood SVG “started, of course, with a clear expression of a political will.

“But the political will alone and the discussions at cabinet alone cannot bring dreams to reality. The legislative framework had to be put in place. And before the end of this year, we are going to see through the Parliament of our country a modern Fisheries Act. We continue to work to ensure that we follow international standards.”