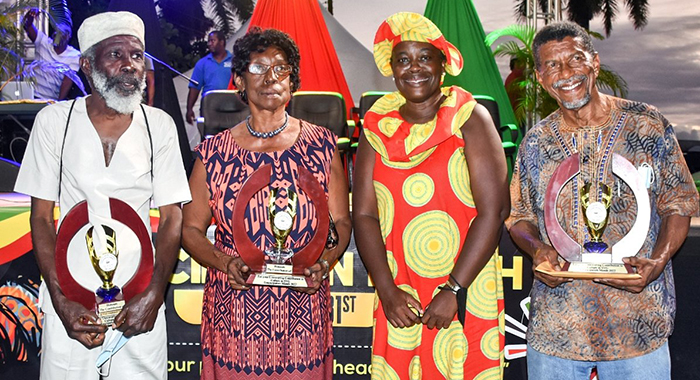 Three people were honoured for their contribution to culture as Emancipation Month activities were launched in Kingstown, on Friday.

David “Darkie” Williams, Ann Jones and Cecil “Blazer” Williams were recognised for their work in culture and the creative arts.

The citations read at the event at Heritage Square, in Kingstown, are as follows:

From schools, to church groups, to village troops, to beauty pageants, his presence and his inputs always stand to make a positive difference to the eventual outcome of a presentation. And that will be all that counts for David “Darkie” Williams, actor, writer, director, drummer, theatre technician and more.

For David “Darkie” Williams, there have been a few accolades. He has been recognised for his work by several local entities and he has had the honour of being the director for two of SVG’s CARIFESTA presentations. In local theatre festivals, he has been named Best Director seven times, Director of the Year two times, and Writer of the Year four times. David “Darkie” Williams has also written and directed several pieces, which have gained regional and international recognition, including two TamTam Video Awards from Italy as well as two Canadian awards.

Jones was instrumental in acquiring and securing the playing field in Camden Park and she brought to life the South Leeward Netball Association during the days of dirt courts, which required flouring the field.

She has been the manager of Symphony Orchestra and was very instrumental in the youth band’s development. In her capacity as principal, Jones ensured that Questelles Government School participated in everything that was cultural and got the students involved.

Cecil “Blazer” Williams has successfully published a considerable number of literary works, including four collections of poems, 15 plays — all of which have been staged, four novels, the latest of which is “When The Water Dried Up” (2022).

Blazer was the founder-director of the New Artists Movement (NAM) St. Vincent and the Grenadines.  He was a member of the jury for the Casa de las Américas Awards, 1981. He serves as an adjudicator for calypso and mas in national competitions.

He is a cultural ambassador and received a lifetime achievement award for literature and the performing arts from the Vincentian Association of Artists, Writers And Producers in 2013. And, in appreciation for a significant contribution to culture and the arts to the people of St. Vincent and Grenadines, the New York-based Vincentian organisation VincyCares, Inc. awarded the Lifetime Achievement Award to Blazer in 2018.