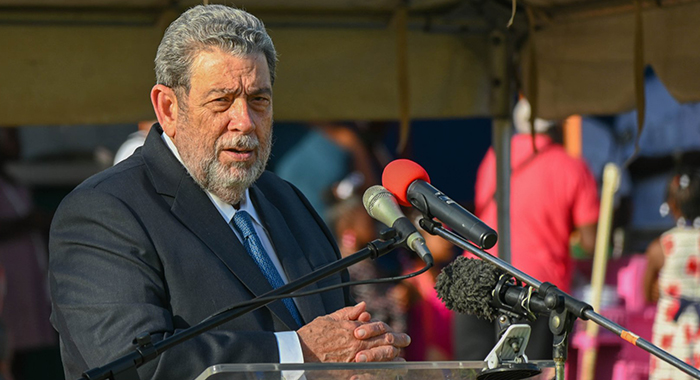 The 115 recruits who have begun their two-year probation before becoming full-fledged police officers have been warned not to model lazy officers already enlisted in the constabulary.

Prime Minister and Minister of National Security, Ralph Gonsalves, issued the warning at the 40th Passing Out Parade at Victoria Park, on Thursday.

He pointed out that the training at the Police Training School was “essentially of a preliminary kind to get you up to speed to move from the status of a recruit to a member of the police force.

“But you are going to have a lifetime of training because so long as you remain a police officer, you will be learning every single day,” Gonsalves said.

He told the police officers that they have to continue to read and study.

“Your work experiences in whatever area you’re put in would ensure that you would learn on the job from other senior members of the police force and for you to bring your fresh insights so that some of the things which are being done in an old way, you may have suggestions as to how they can be better performed,” the prime minister said.

He noted that the officers will not be on a period of probation, which he said is necessary and desirable.

“Yet the size of the police force has more than doubled from 600 or so, to over 1,200. And when you put in the Coast Guard and the fire services the number is in excess of 1,400.

“We have had to increase the size of the police force because we are living in modern and challenging times, where law enforcement today is of a different nature as to what it was 20 years ago.”

He said this requires a larger constabulary “and we also require men and women with a level of entry qualifications to put them in a position that they can be engaged in more scientific training and policing.

“As the criminal fraternity has become more sophisticated, you, the police officers, individually and collectively, equally have to be more sophisticated, more modernised and better at the game. And I tell you this, many modern-day criminals are very ingenious and you will have to have a comparable ingenuity to be able to maintain and uphold the laws of the country and contribute, broadly to law and order.”

Gonsalves said that many of the officers have been developing important skills and “are quote-unquote great or may consider yourself to be very bright”.

He cautioned, however, “what is critical in your policing is not to forget certain fundamental values as to why you’re a police officer and your interaction with the community, which you are sworn to serve”.

The prime minister told them that there are two types of brightness: one that blinds and another that illuminates.

He said the constabulary requires the kind of brightness that illuminates pathways, adding that this can only be done “in communion with your fellow officers and with the community at large.

“I have absolutely no doubt that you will do well. You have been selected from hundreds, indeed nearly 1,000 applicants and you have been assessed as being the best from the larger pool.

And only you can harm yourself,” Gonsalves said.

He urged the officers to be “disciplined, to keep your head on.

“Be conscientious. And please, for God’s sake, when you actually start to work, don’t allow some lazy or ill-disciplined ones currently in the force — because you have a few — don’t use them as your role model, as your example. Because if you do that you’re probably not going to last very long.

“So, I am urging you to follow the example of those who are performing well and those who are worthy of being emulated. I hope to meet you all individually over a period of time. And I’m always available to discuss this or that matter with you so long as you go through the proper channels,” Gonsalves said, and wished the officers “all the best”.