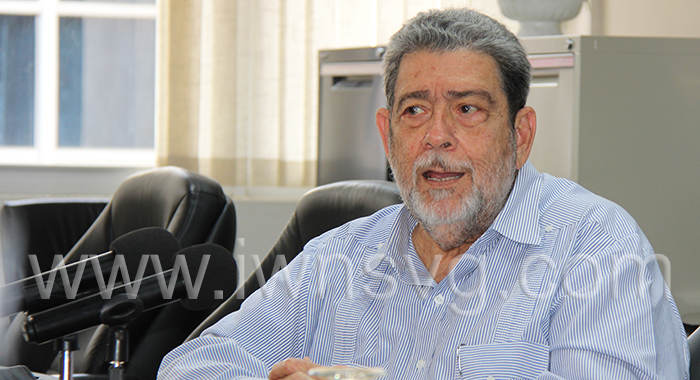 The government’s accounts registered a deficit during the first seven months of 2022 and Prime Minister Ralph Gonsalves said that his finance ministry is “holding things together, but it’s tight”.

At the end of July, the overall deficit — both on the capital and current accounts — was EC$53 million, up from $40 million last year.

“So the current account, though we are in deficit, the deficit is small,” Gonsalves said on Wednesday as he announced the figures.

He said that the grants received in 2021 — the year in which La Soufriere volcano erupted — declined this year.

“So that when you look at revenue and grants for the first seven months of the year, we are down about 10% — from EC$427 million to EC$386 million.”

“The main revenue items are holding — taxes on goods and services like the excise duties, import duties, interest levy paid by the banks. The key revenue drivers they’re holding up pretty well,” the prime minister said.

He said the “big drop” in any category of revenue was the absence of the windfall from alien land holding license and stamp duties and property transactions, particularly in Mustique.

“Fortunately, the other items have made up for the difference between the windfall and what you may call the normal number for alien landholding licenses and stamp duty on property,” Gonsalves said.

He said that in terms of the outturn, current expenditure was basically the same — $385 million.

Of that amount, employees’ wages and salaries and National Insurance Services contributions accounted for EC$192 million or almost 50%.

The government paid interest of EC$23 million on the national debt.

“… and then a lot of money we have to put with the statutory bodies and so on, like BRAGSA and the Community College, social assistance benefits, those came up to close to $111 million, basically the same like last year.”

The prime minister said that capital expenditure amounted to EC$63 million, “a little down from last year”, adding that some of the figures were yet to come to account.

“We’ll be able to say — maybe in another couple of months — what is happening there. There are some big items which are to come to account. The long and short of it is that we’re holding things together, but it’s tight,” the prime minister said.

He said that if the government were to adopt the proposal made by Opposition Leader Godwin Friday in an Aug. 11 national address, the current account deficit would increase from EC1.7 million to EC$127 million.

“How you going and finance that?” he said, adding that the opposition was ignoring all that his government was doing.

He mentioned the money that the government is giving to 5,400 people affected by the eruption of La Soufriere volcano, the EC$3 million road cleaning programme, scholarships, “the strengthening of the social safety net overall”, EC$900,000 for arrowroot farmers, the excise tax waiver of $1.50 per gallon of gasoline and $1.05 per gallon of diesel and the waivers in relation to VAT on electricity.

“We had a meeting with the IMF (International Monetary Fund). The IMF came down last week, I believe they’re still here. I had an inception meeting with them, of course.

“They want to know how long I’m going to keep these measures in place to help people. I tell them was three months and I had to extend it again. And of course, naturally they are saying you have to be very careful and also on.

“I said, ‘Yes, but we have an acute judgement on this thing. We are between prudence and enterprise. We are balancing. We are not being reckless but we’re easing the pain in particular ways as the public seeing’,” Gonsalves said.