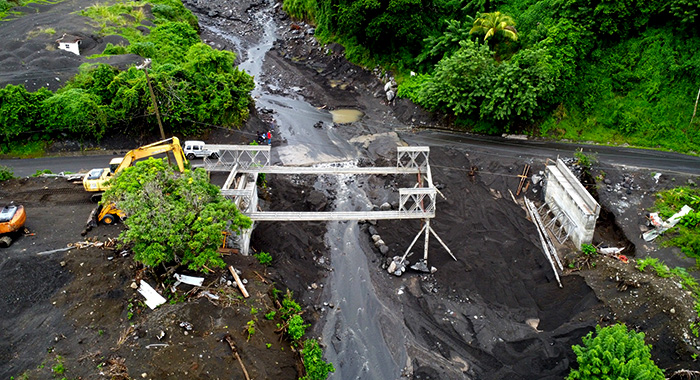 Residents north of the Rabacca Dry River will receive an “early Christmas present” in the form of the two temporary bridges being built in the district.

“I understand the completion date is somewhere around the end of November and … I am indeed happy as to where we are with this level of construction…” Montgomery Daniel, MP for North Windward, where the bridges are being built, said on NBC Radio on Wednesday.

“I want to say that the constituency, come early December, will receive a very early Christmas present from the Government of St. Vincent and the Grenadines, wherein that the temporary bridges will be in and will be used,” said Daniel who is minister of works and was acting prime minister.

“You will have easier access moving north or south of those two rivers, both Overland and Noel,” he said.

Daniel said he was pleased with the progress of the work, adding, “It was indeed a pretty sight to see what was happening [at Overland]”.

He said: “The contractor had begun placing the steel frame onto the wing walls of the [concrete] structure … and it was indeed a pretty sight to see what was happening there.

“It is indeed a great feeling and I am sure the persons who will be using the facility, I am sure they would be feeling much more happy at this time with the structures in place.”

Last Christmas Eve, motorists and pedestrians spent hours at river crossings in the area unable to advance because the rivers were in heavy flow as a result of heavy rains.

The problems in the area have been made worse by the April 2021 eruption of La Soufriere volcano, which had led to mudflows in the area.

And, with the heavy rainfall over the last few months, the rivers in the constituency, many of them seasonal, have been overflowing their banks leaving commuters stranded for hours.

In February, Daniel announced that work on the Bailey bridges at Overland and Noel rivers would be completed by August.

In June, Prime Minister Ralph Gonsalves announced September as the new installation date. At that time, he said the country should receive by November-December six additional bridges that were ordered.

Since then, St. Lucia has lent the country a 30-metre Bailey bridge which will be placed at Overland.

The bridges are being constructed under the Volcano Eruption Emergency Project.

One reply on “Temporary bridges ‘a very early Christmas present’ for N. Windward”